Written and directed by Samuel Fuller

At the close of the Civil War, Confederate soldier O’Meara (Steiger) refuses to accept defeat. Soon he heads West, seeking a new home among the Sioux. 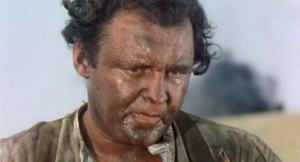 This 1957 Technicolor western is the 10th feature film directed by Samuel Fuller (The Big Red One). In addition to directing the movie, he also wrote and produced it. The film stars Rod Steiger (On the Waterfront), Sara Montiel (The Last Torch Song), and Ralph Meeker (The Naked Spur). Also featured are Brian Keith (The Parent Trap), Jay C. Flippen (The Wild One), and Charles Bronson (Once Upon a Time in the West).

This story is a somewhat narrow look at the effects of losing the Civil War on one man. The setup does a nice job of establishing the outlook the film is going to take. This includes establishing the level of grit that the story has. This grit is built into the story the same way that film noir uses it. This sets the tone for an interesting and unique experience. The action throughout the movie is written nicely, and helps to keep the pace of the movie going. The dialogue is a mixed bag of nicely understated work and wildly overdone statements on honor, respect, and community. The end result is a movie that has some highs and lows, and never really finds the consistency it needs to be great. Still, the premise is very interesting and the film has a lot to offer. It’s also nice to see a 1950s western that doesn’t spend too much time relying on bad American Indian stereotypes.

The acting in this movie is a collection of nice work from the core of established actors. Rod Steiger leads the way with a somewhat uneven performance that’s complicated by the Irish accent he employs throughout the film. Some of the lack of balance might be attributed to the dialogue written for him. Fortunately he’s able to overcome some of these weaker moments with a handful of great scenes. His co-stars also do nice work with their roles in this one. Keith, Meeker, Bronson, and Flippen all find nice moments throughout this movie. Collectively the cast does a nice job avoiding some of the painful stereotypes that were used to portray American Indians throughout this era. It should be noted that Montiel’s role in the film was somewhat undercut when her dialogue was overdubbed by Angie Dickinson. (The producers did this due to her heavy accent.) Overall, this is a solid cast that does good work with the uneven script.

This film looks good, and uses the landscape of Utah to its advantage. Filming on location gave Oscar-winning cinematographer Joseph F. Biroc (The Towering Inferno) a lot to work with. The setting plays a huge role in the film and adds a level of authenticity that should be appreciated. The movie also has the distinction of being the first feature film to use blood squibs to simulate bullet wounds. The production value of this movie has helped it to age well. The score, composed by Victor Young (Roman Holiday), also adds a nice layer to the movie. 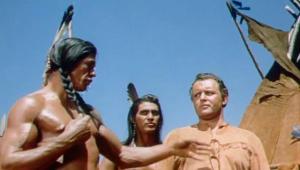 If you’re a fan of westerns, this is one you should see. I would also suggest this to fans of Samuel Fuller. While this isn’t the genre he might best be known for, it’s a nice example of his work. This is also a good one for fans of any of the stars. While this isn’t a great movie, it has some great moments. It also does some unorthodox things within the genre that are very interesting. I give this one 3.3 out of 5 stars.