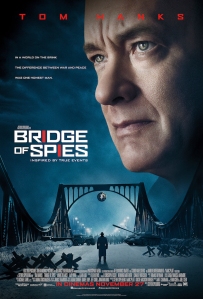 Insurance attorney James Donovan (Hanks) has been enlisted to negotiate the return of a downed U.S. pilot being held in the Soviet Union. These negotiations are anything but simple as Donovan navigates the sensitive world of Cold War politicking. 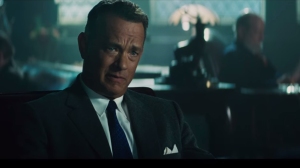 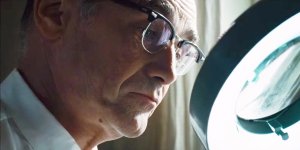 This is a solid historical drama with a nice level of suspense built in. The movie starts off with a nice foundation and builds itself into a complicated and riveting series of events. There is a nice level of tension built into this movie that directly mirrors the global tension surrounding the Cold War. The writing also does a nice job of illustrating the strict loyalty that both sides expected from their people. The dialogue is sharp, and plays well within the tone of the film. The story doesn’t take a lot of risks, but it has enough going on that nothing feels hollow or incomplete. Overall, this is a very good story from a group of talented writers.

The acting in this one is solid from beginning to end. Tom Hanks was a great choice for the lead role in this one. He does a good job transitioning his character from an unsuspecting insurance attorney to a Cold War negotiator. A big part of this success was his ability to show his conflicting emotions throughout the film. Mark Rylance plays opposite Hanks throughout this movie. His performance holds up nicely, and helps to create the uneasy relationship between the two. Alan Alda and Amy Ryan also do very good work in this movie, and they’re joined by so many other good actors. Overall, the performances take advantage of the great writing and really bring this an intensity that definitely pays off.

This movie was filmed on location in Brooklyn and several locations in Germany. It’s important to credit the crew with the wonderful transformation of these locations that brought the 1960s back to life. The film also benefits from excellent editing by Michael Kahn (Schindler’s List). The cinematography by Janusz Kaminski (War Horse) also adds something nice to this one. Overall, the creative people behind the camera did a great job with all aspects of the production. The movie also features a wonderful score by Thomas Newman (Skyfall).

This is another solid movie from Steven Spielberg and the creative minds he regularly works with. Although the movie doesn’t do anything new, it does tell a great story. If you’re a fan of Spielberg this is a must-see film. I would also suggest this one to fans of any of the actors. Fans of political thrillers or historical dramas will also enjoy this one. I give this one 4 out of 5 stars.