Based on a story by Sam Hellman

After his brother is killed, Wyatt Earp (Fonda) takes a job as the Marshall of Tombstone. As he searches for his brother’s killer, Earp connects with notorious gunman Doc Holliday (Mature). Earp’s search soon leads him to Old Man Clanton (Brennan) and the OK Corral.

This is a benchmark Westerns in the incredible career of director John Ford (The Searchers). This film is based on a fictionalized biography of Wyatt Earp written by Stuart Lake (Winchester ’73). The screenplay was written by Samuel G. Engel (Blue, White and Perfect) and Winston Miller (The Bounty Hunter). The film stars Henry Fonda (The Grapes of Wrath), Victor Mature (The Robe), Linda Darnell (No Way Out), Walter Brennan (Red River), and Cathy Downs (The Dark Corner).

This is a highly fictionalized story that focuses on the events that led up to the famous shootout at the OK Corral. The writers took real people and wove them into a Western that has moments of intense drama and sentimentality. The film does a nice job of diving right into the motives of the major characters in this one. These motives are clear, and they drive all of the action throughout the film. The dialogue throughout the movie is simple and effective, and mainly provides the actors with nice moments. This is a predictable movie, but only because of the many Westerns that have used the same pattern to tell their story. Despite that predictability, this one has some great moments that really help it to stand out as one of Ford’s best works. 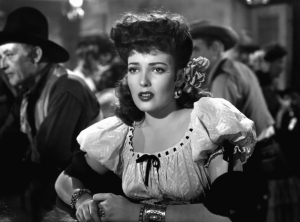 Henry Fonda was a great choice for the role of Wyatt Earp. His intensity and strength shine as he works opposite Walter Brennan and Victor Mature. This is also a nice reminder of how comfortable Fonda could be in the Western genre. His performance really helps to elevate this movie above most Westerns of the day. Victor Mature also lends his talent to bringing this one up. His performance as Doc Holliday is strong and intense. His chemistry with Linda Darnell is also evident throughout the movie. The third star in this one is definitely Walter Brennan. A familiar face in Westerns, Brennan does such a great job in this one. Brennan might have had the biggest challenge since his character slowly increases in anger and intensity throughout the film.

The three men named above had some help in making this one work. Linda Darnell and Cathy Downs also lend their skills to this movie. Their roles couldn’t be more different, but both women had to connect with a number of their co-stars. These connections are important to the story and the chemistry. The entire cast does a good job with bringing this unique Western to life. 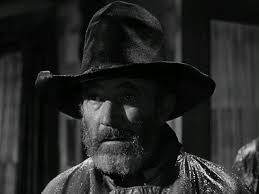 This movie looks incredible. The cinematography gives this film a depth that really enhances every other aspect of the production. The use of light and shadow throughout the film really helps to keep the tone of the story intact. The movie also took full advantage of one of Ford’s favorite locations. Much of the production was done in Monument Valley in Arizona, providing a breathtaking backdrop for this movie. The pace of the film is deliberate and the action is dispersed nicely throughout. 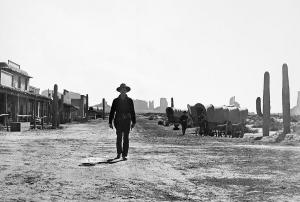 The film was immediately lauded as another innovative Western from John Ford. Since then the film has continued to be ranked among the best work of his career. These accolades include the film’s inclusion in the United States Library of Congress in 1991, and the continued appreciation of new generations of scholars and critics.

It’s important to note that this film was heavily re-edited by Fox studio boss Darryl F. Zanuck. Ford’s original version was cut down by more than 30 minutes, and the ending was altered. Anyone looking to see some of the original cut should check out the Criterion Collection version which includes the theatrical release as well as a prerelease cut. For fans of Westerns this is a must-see movie. I would also recommend this one to anyone who loves classic cinema. Fans of the stars won’t be disappointed with the work in this film. I give this one 5 out of 5 stars.