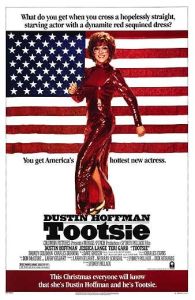 Michael Dorsey (Hoffman) has struggled to make it as an actor in New York. After his latest rejection he disguises himself as a woman and gets a part on a daytime soap opera.

This 1982 classic is based on the story by Don McGuire (Bad Day at Black Rock) and Larry Gelbart (Oh, God!). Gelbart co-wrote the screenplay for the movie with Murray Schisgal. Academy Award winner Sydney Pollack (Out of Africa) directed the film. The stars of the film include Dustin Hoffman (Midnight Cowboy), Jessica Lange (The Gambler), Teri Garr (Mr. Mom), and Bill Murray (Moonrise Kingdom). The film earned an Oscar nomination for Best Picture, and Sydney Pollack earned a nomination for Best Director.

This is a fantastic story that really embraces the ridiculous premise it’s built around. Each of the characters has a unique connection to Michael Dorsey. These connections give the story a great number of opportunities to play with the awkward moments that seem natural to the situation. That ability to make something this ridiculous seem so natural is what makes this one work. This movie has great dialogue that accentuates the conflicts between Hoffman’s character and those around him. There is also wonderful inner-turmoil and justification that makes for great moments. This one also does a nice job of not dwelling on the practical concerns a man might have in this situation. (Kind of the opposite of Mrs. Doubtfire.) Overall, this one never loses sight of the humor and really plays up the possibilities. For their work, Gelbart, Schisgal, and McGuire were nominated for an Oscar for Best Original Screenplay.

The acting in this movie is so great. Dustin Hoffman leads the way with a performance that embodies all of the frustration, wit, and desire within his role. His comedic timing is excellent, and he has great chemistry with all of the cast. For his work Hoffman was nominated for Best Actor. (He was beat out by Ben Kingsley’s powerful performance in Gandhi.) Hoffman was joined by many talented people including Jessica Lange. Her performance in this one works nicely to accentuate some of the many conflicts within the film. She also has great chemistry with Hoffman. Her performance earned her an Oscar win for Best Supporting Actress, beating out co-star Teri Garr. Garr is also excellent in this one. She has one of the more fun roles in the film, and she pulls it off perfectly. Like Lange, Garr has great chemistry with Hoffman. One more star who brings something special to this one is Bill Murray. His performance contrasts nicely with Hoffman’s, making their relationship really work. Overall, this one doesn’t seem to lack anything in the acting department.

This one looks and sounds great. The visuals really capture the world of 1982 in all the right ways. The result is a movie that has aged wonderfully. Like most classic comedies, the movie doesn’t seem to lose anything despite the changes in society or technology. The cinematography does a great job of capturing the action and also portraying the behind-the-scenes world of television production. For his work, Owen Roizman (The Exorcist) was nominated for Best Cinematography. The song “It Might Be You” was also nominated for Best Original Song. The film also earned Oscar nominations for Best Sound and Best Film Editing, bringing the total number of nominations to ten.

This is a classic comedy that has stood the test of time. Fans of Hoffman, Lange, Garr, and Murray need to see this one. If it’s been a while, I would encourage you to check this one out again. This isn’t a comedy made up from a collection of gags, it is intelligent humor that still works just as well as it did in 1982. All of the setups pay off and the final product is near perfect. I give this one 5 out of 5 stars.