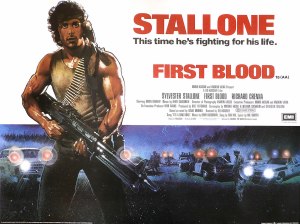 Based on the novel “First Blood” by David Morrell

John Rambo (Stallone) is home from Vietnam and looking for a fresh start. When he’s met with abuse from a small town cop (Dennehy), Rambo’s demons come back to haunt him. Now he’s fighting for his life with his deadly combat skills.

This film began when David Morrell’s 1972 novel of the same name was optioned by Columbia Pictures. After spending ten years begin developed, the film was completed with Ted Kotcheff (Uncommon Valor) as director. The script went through a number of writers including Michael Kozoll (The Hard Way), William Sackheim (The Competition), and Sylvester Stallone (Rocky). Stallone would also star in this one alongside Brian Dennehy (Romeo + Juliet) and Richard Crenna (Sabrina).

On the surface this appears to be one of many overblown 1980s action flicks. Thankfully, this one has a bit more to offer than most action movies from the era. The story does feature a lot of action, but it’s based around a very unique look at post-Vietnam America. The story plays to extremes for all of the characters, creating very exaggerated situations. Luckily, the writing goes all-in on these situations leaving things feeling consistent with the world of the film. The dialogue is the weakest aspect of the story. While none of the dialogue is bad, it just feels a bit too melodramatic for the gritty nature of the film. Many different movie have attempted to tell this kind of story, but this one feels like an original. There are some very solid themes throughout the story that help this become much more than an “action flick”. It might be a bit wild at times, but it’s a solid movie.

The acting in this movie fits the story and the writing. Throughout the film the audience is introduced to people who are more caricature than character. This might have been bad if it didn’t fit into the story so well. These larger-than-life characters help to express the deeper themes of the film. Fittingly, Sylvester Stallone took on the starring role as the wayward former soldier. His performance does a nice job capturing the fear, resentment, and frustration of a returning veteran. He’s paired nicely with Brian Dennehy. Dennehy’s role played opposite to Stallone in every way. Their friction and contention play out nicely throughout the movie. The movie also benefits from an interesting performance by Richard Crenna. The entire cast does nice work helping to express some of the deeper themes in this one, all while keeping the action going.

This movie was filmed on location during the winter in British Columbia, Canada. The location serves as a great backdrop for the action and the isolation necessary for the story. Initially the movie was cut at over three and a half hours. Stallone was so upset that he tried to stop the film’s release. Heavy re-editing brought the run time down to the 93 minute version that is best known today. This one takes some liberties with reality during the action, but otherwise remains true to the story.

This isn’t a great movie, but it’s a good movie that holds up better than most of the similar movies from the era. If you’re an action fan, this is a must-see. I would also suggest this to fans of Stallone or Dennehy. This is a violent movie, but it’s not a non-stop action flick. I give this one 3.5 out of 5 stars.