Written and Directed by Nancy Meyer

After struggling to find himself after retiring and losing his wife, Ben (DeNiro) hoping to get back in the workforce. His opportunity comes when he finds a position as a senior intern for an online retailer. Working for Jules (Hathaway), Ben finds ways to help himself and those around him. 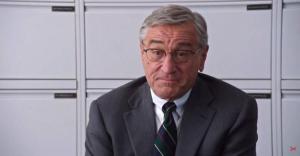 This is a fun comedy from Nancy Meyer (The Holiday), who both wrote and directed the film. The movie stars Oscar winners Robert DeNiro (The Mission) and Anne Hathaway (The Devil Wears Prada). Rene Russo (Thor: The Dark Work), Anders Holm (The Interview), and Adam DeVine (Pitch Perfect) are also featured.

This is a film that does everything you would expect it to. There is something inherently predictable about light comedies like this. Thankfully, movies like this one can also succeed despite the predictability. This movie has great characters that really make every moment interesting. The little twists and turns in the story won’t surprise anyone, but they throw the right conflict into the mix. This conflict feels natural to the story, and it helps to bring out the right tone in the film. The writing also gives the right moments to the characters to keep this one feeling good. This might not be a completely new concept, but the story is well-told.

The actors do a nice job making the most out of this film. Robert DeNiro softens up his role as the rudderless retiree. His soft delivery really plays right into the story, and helps him to connect with the rest of the cast. He has especially good chemistry with Anne Hathaway. She’s also good throughout this movie as well. She seemed to understand both the strengths and weaknesses of her character. These two are joined by Rene Russo, Anders Holm, and Adam DeVine; all of whom do good work in this one. Overall, there aren’t any weak performances from this cast.

This is a fun movie that doesn’t break any new ground. The theme centers around the challenges of retirement, but there’s enough in the story to appeal to a wider audience. The acting is good, and the payoff is sappy and fun. This is a great choice for fans of the stars. I would also suggest this one to anyone who likes a light comedy that’s good for the family. (This isn’t necessarily good for smaller kids, but older kids and adults should enjoy it.) I give this one 3.3 out of 5 stars.