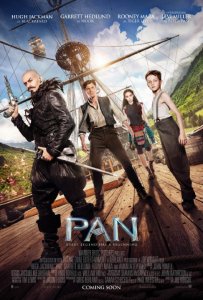 Based on characters created by J.M. Barrie

Young Peter (Miller) doesn’t know it yet, but he’s destined for greatness. After being swept off to Neverland he joins up with James Hook (Hedlund) and Tiger Lily (Mara) to defeat the ruthless Blackbeard (Jackman).

This unique approach to the world of Peter Pan which was created by J.M. Barrie in 1904. This time the screenplay came from Jason Fuchs (Ice Age: Continental Drift). He’s the latest writer to take on the world of Peter Pan and Neverland. (See Hook, Finding Neverland, Disney’s Peter Pan, etc…) The film was directed by Joe Wright (The Soloist). The cast of the film includes Oscar nominees Hugh Jackman (Les Misérables) and Rooney Mara (The Girl With The Dragon Tattoo (2011)). Garrett Hedlund (Inside Llewyn Davis) also stars in this one with newcomer Levi Miller (A Heartbeat Away) playing the title character.

This story takes the characters from J.M. Barrie’s classic story and twists them in unexpected directions. Similarly to Maleficent, this one tries to find new approaches that change the way we understand some popular characters. Unfortunately, this seems to prove that you can only push characters too far outside of the world they were created in. Part of the magic of Peter Pan was the fact that his origin was never an important part of the story. This time Jason Fuchs has made it the basis of the whole film. In addition to the poor premise, Fuchs also attempted to change the nature of some of the classic characters from that world. The story is not only awkwardly executed, but also incredibly boring. Combined with some other major missteps, this one never takes flight. (And no amount of pixie dust or clapping could save it.) 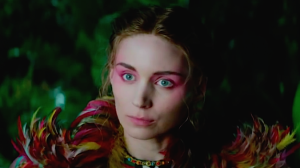 Once in a while you get good actors in the wrong project. This is definitely the case with this one. Hugh Jackman plays a strange version of the pirate Blackbeard in this one. Unfortunately the writing turned this character into a monster without any interesting qualities. In the end even Jackman seemed to recognize that nothing could save this one, and the performance is flat and uninteresting. Rooney Mara found herself in an equally unfortunate position with this one. Her performance seems to find a different tone than many others in the movie. There’s no real connection with her and anyone else in the cast either. Like Jackman, most of this should go back to poor writing. Levi Miller and Garrett Hedlund also find themselves in the midst of a messy movie this time around. Their performances are both over-acted and irritating. The cast probably never had a chance with the way this one was written and produced. In the end the performances don’t do anything to elevate this one. 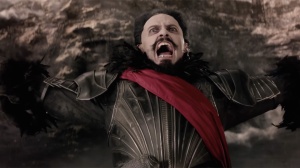 This movie doesn’t really do anything well. Even the overuse of CGI couldn’t make this one look good. Instead of inspiring wonder and magic, this just feels like a mashup of highly saturated color and weird camera work. Even the costuming in this one feels strange. There’s no common theme to the way the world of Neverland exists. Each segment of the story seems to take place in an entirely different universe, which makes this feel disjointed and awkward. The music in this one is also a mess. Covering songs like Smells Like Teen Spirit and Blitzkrieg Bop requires finesse. Instead this one feels like someone tried their best to ruin good music.

Normally I try not to trash any movie I watch. I’m always seeking out those one or two moments, performances, or elements that can make a movie worth watching. This time I just couldn’t find anything to like. If you’re thinking about seeing this one, don’t. This movie just doesn’t offer anything that would be worth sitting through for 111 minutes. I give this one .5 out of 5 stars.