Master Ip (Yen) takes a stand against an assortment of thugs and criminals seeking to take over his hometown.

The third installment of the Ip Man series was written by returning writers Edmond Wong (Ip Man) and Chan Tai-Li (Ip Man 2). This duo both worked on the two previous films. This time they were joined by newcomer Lai-yin Leung (Rigor Mortis). Another returning contributor to the film was director Wilson Yip (The White Dragon). He had also worked on the previous two films. The film also brings back Donnie Yen (Hero) in the title role. The film also features the return of Lynn Hung (The Right Mistake), as well as new faces like Mike Tyson (The Hangover) and Jin Zhang (The Grandmaster). 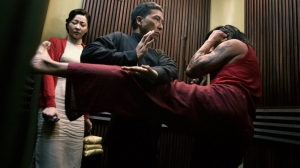 This is a unique story that takes the main character on a wild series of adventures throughout the film. The writing is simple and often on-the nose, but still entertaining. This isn’t a movie to be taken too seriously, although the writers did their best to add in some emotional moments. While this is a fun movie, it’s also full of questionable story choices. This might have worked better as a series of shorts since different events don’t have any continuity. The other big issue is the clear desire to instill the story with national pride. This overwhelms certain moments of the movie, and it’s not very well disguised. This is a story with lots of fun moments, but none of the cohesiveness that it needs. 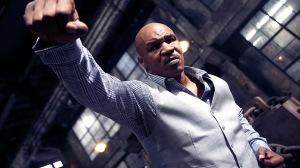 The acting in this movie is just like the writing, very silly and fun. Donnie Yen and Jin Zhang have enough martial arts talent between them to make the action scenes a pleasure to watch. They also both do a good job with their more serious scenes. Lynn Hung also does a nice job. Unfortunately her character is central to most of the more melodramatic moments in the film. Mike Tyson also has some fun moments in this one. (All I can say is that seeing him speak Chinese is worth the price of admission.) Overall, this cast fits the tone and style of the movie perfectly. While the performances aren’t going to win critical acclaim, they do enough to keep the fans of these types of films happy.

This one succeeds on the strength of the action. The martial arts displayed throughout this movie are creative, exciting, and fun. The camera work and editing do a nice job capturing these moments and keeping the action going. While this doesn’t do anything new, it does most of the technical things just right. Kenji Kawai (The Serialist) also did a nice job composing the score for this one. 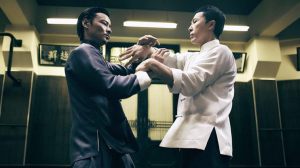 Overall, this is a fun movie that fans of the genre will definitely enjoy. I would definitely recommend this one to fans of the series. I would also suggest this to fans of martial arts movies. The action is put together wonderfully, and the stars handle it perfectly. This isn’t a game-changer, but it’s fun and weird and unique. I give this one 2.5 out of 5 stars.