Written and directed by Joel and Ethan Coen

Eddie Mannix (Brolin) is in charge of a busy movie studio. Now his job has gotten a bit more complicated with the disappearance of the star of a big-budget film.

This movie is a quirky new addition to the body of work created by the Coen brothers (Inside Llewyn Davis). The story was written by Joel and Ethan, who both worked to direct the film as well. The movie features a long list of stars including Josh Brolin (No Country for Old Men), George Clooney (Oh Brother, Where Art Thou?), and Alden Ehrenreich (Blue Jasmine). Ralph Fiennes (The Grand Budapest Hotel), Jonah Hill (22 Jump Street), Scarlett Johansson (Avengers: Age of Ultron), Channing Tatum (Foxcatcher), and Tilda Swinton (Moonrise Kingdom) are also featured.

This is not a typical Coen brother’s story. The writing feels like a collection of fabulous scenes all written before they were connected. The comedy in these great moments is wonderfully written. The introduction of each character brings out some of the best moments of the film. Unfortunately this film lacks a connecting arc for these awesome sequences. While the small moments shine, there is little clarity given to the overall plot of the film. This leaves the movie feeling lost and often unbalanced. While it’s still got some great moments, this doesn’t live up to the best of the Coen’s work.

The acting in this movie features a collection of great performances from the entire cast. The list of stars is long, and each of them did great work. Like the writing, the great moments in this movie come in small doses. Most of this is due to the way the film was written and edited. Each segment in the early part of the film provides a nice stage for a new character to be introduced. In these moments Brolin, Tatum, Clooney, Fiennes, Ehrenreich, Hill, Johansson, and Swinton all do great work. The rest of the cast also does nice work in this one. Unfortunately the acting wasn’t able to fix the larger issues with the script.

This film sought to provide a believable version the world of the 1950s studio system in Hollywood. The camera work, sets, colorization, and costuming all help to make this possible. One of the great aspects of the movie was the decision to bring a number of popular genres from the era to life.

This decision brought behind-the-scene moments from epic films, Westerns, and musicals to life. Cinematographer Roger Deakins (Sicario) did a nice job emulating many of the camera styles of the era. Overall, this one looks great and does all the right things from a technical standpoint. The music, written by Carter Burwell (Blood Simple) also adds a nice layer to the film. 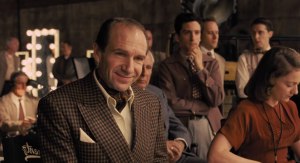 This movie has some great aspects, but lacks the cohesive structure that it needs. Despite the issues, fans of the stars will find some great moments within this one. This is a hard movie know how to recommend. Fans of quirky comedies might enjoy this one. I would also suggest this to anyone who loves the comedies of the Coen brothers. I give this one 2.5 out of 5 stars.