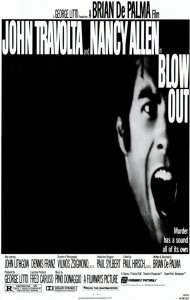 Jack Terry (Travolta) accidentally recorded the sound of a fatal car crash. While the authorities call it an accident, Jack is convinced that something more sinister is going on. The deeper he digs, the more danger he finds himself in.

This story is a very tightly written thriller that takes a familiar arc and makes it new. In a very Hitchcock-esque style, De Palma puts an unexpected protagonist in the midst of something much bigger than himself. (Think Rear Window.) From a simple setup, the film dives deep into intrigue and mystery. The writing does a great job keeping things simple and finding just the right times to twist things. The dialogue is nicely written, and never feels like it’s overdone. Much of the film relies on visuals and action, which really helps to keep the tension in the story. Despite being 35 years old, this story holds up wonderfully. I also consider this to be the best writing he has done in his lengthy career.

This movie features a number of great performances. John Travolta has been remembered for films like Saturday Night Fever and Grease, but this performance is one of his best. He does a great job understanding the tone of the film as well as the psychological changes of his character. He finds a deep emotional connection with the role that plays out wonderfully throughout this one. John Lithgow is another actor who did great work in this one. He’s brings out all the right aspects of his role. The cold and calculating nature of his performance really adds to the tension. These two great actors are joined by Nancy Allen and Dennis Franz, both of whom give very good performances. Overall, this cast seemed to understand the nature of the story, and this helped them to bring out all the best aspects of the script.

The visuals in this film benefit from the excellent cinematography of Vilmos Zsigmond (The Deer Hunter). His work helped to create a visual tone that really adds to the overall production. In particular, Zsigmond used shots done with a split diopter to create the illusion of intense deep focus. This gives the movie a unique visual styling very familiar to fans of De Palma. The movie also uses color to set the tone of every scene. Like Hitchcock, the movie relies on subdued colors as the canvas of the film. The more bold colors used are intentionally placed in key moments. (Think Rope.) The movie is also edited in a way that keeps the pace and the tension intact. Beyond the visuals, the music in this one is also good. Composer Pino Donaggio (Don’t Look Now) did a great job accenting the film with a solid score. Overall, the production work done on this film holds up nicely.

This is a great movie that has a lot to offer fans of De Palma. I would also suggest this one to fans of Travolta, Lithgow, or anyone else in the cast. Anyone who loves thrillers should take the time to check this one out. I give this one 4.5 out of 5 stars.