Written and directed by Neil Jordan

Following the end of the Easter Rising, Michael Collins (Neeson) became an outspoken Irish revolutionary leader. Eventually he would lead a guerrilla war against the United Kingdom and helped create the Irish Free State.

This biographical film was the product of many years of waiting. Initially, Michael Cimino (The Deer Hunter) was attached to the project. After he was fired, Neil Jordan (The Crying Game) took up the work and wrote the script for the film. He was eventually able to get the financial support to make the film, and took on the job of directing. The cast of the film includes Liam Neeson (Schindler’s List), Aidan Quinn (The Mission), Julia Roberts (Notting Hill), Alan Rickman (Die Hard), and Stephen Rea (V for Vendetta).

This is a pretty expected biographical film from a story perspective. Luckily, Neil Jordan had some great history to work with. The life of Michael Collins was filled with the kind of moments that movies like to have. Jordan was able to tap into the truth and craft a story that is rich in history, but also able to connect the audience with Collins and the rest of the characters. The film works in segments that address different periods of time that were important to the life of Collins and the lives of the Irish revolutionaries. This creates a movie that can feel a bit drawn out at times, but still offers a lot of payoffs. The dialogue in the movie is good, but can feel a little overly dramatic at times. This is a tough balance since the dialogue packs a punch during some of the more intense moments between the main characters. The action in this one also does a nice job portraying the unique guerrilla war being fought by the Irish. It also takes time to address the brutality used by the people in power on both sides. While this might be a bit predictable, it still tells a very interesting story. 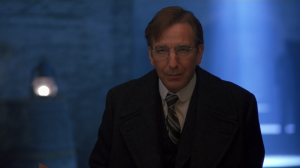 The acting in this one is very good. Liam Neeson has a knack for bringing historical figures to the screen. (Check out The Bounty, The Mission, or Schindler’s List for proof.) This time he was able to connect with the writing and really bring Michael Collins to life. His performance is exuberant, emotional, and intense. His performance seems to embody the dedication that Collins had to bringing freedom to the Irish people. Neeson also seemed to understand the need for youthful energy since he was playing a relatively young man. 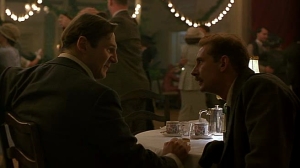 He also did a nice job connecting with the other characters in this one. He had an especially good chemistry with Aidan Quinn. Playing good friends, the two really shared some great moments throughout this. Quinn also did a great job with his role in this one. Julia Roberts also connected with Neeson and Quinn in this one. Their roles all connect in some of the more intimate moments of the film. Alan Rickman and Stephen Rea also add great performances to this one. Their performances help to bring a couple of pivotal roles the right touch. Overall, the acting in this one isn’t game-changing, but it does a lot of things right in telling this story. 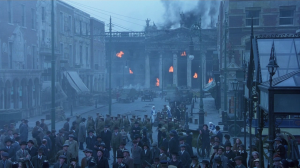 Visually, this movie does all the right things. I don’t think that it’s a groundbreaking film, but the cinematography captures things in all the right ways. There are a number of most fast-paced sequences that really work wonderfully. The work earned cinematographer Chris Menges (The Mission) an Oscar nomination for Best Cinematography. The costuming also plays into the success of the film. The production team worked to bring authentic clothing to re-create the period accurately. Perhaps the best aspect of the visuals in this movie was the ability to shoot in the same locations as many of the events portrayed in the movie. This adds a level of authenticity that pays off throughout the movie. This also gives audiences a chance to see some of the natural beauty of Ireland. The action scenes in the film are also nicely choreographed and feel realistic. Along with set designs and sound work, this one doesn’t really miss any major points throughout the film. The score for the film also adds a nice layer to this one. Composer Elliot Goldenthal (Public Enemies) was nominated for an Academy Award for Best Original Score.

There is a predictability about this film that can become frustrating at times. Much of this is likely due to the slower pace of the film. Either way, it is something to keep in mind. Fans of historical dramas, biographical films, or war movies should enjoy this one. I would also suggest this one to fans of any of the stars. This is a good movie that presents a more honest account of the events than many similar films. I give this one 3.5 out of 5 stars.