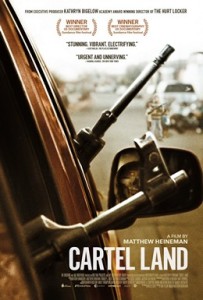 This documentary looks into the problems facing those who are fighting to stop the spread of the cartels. Focusing specifically on Mexico and the Southern United States, the movie does a nice job providing a number of points of view. 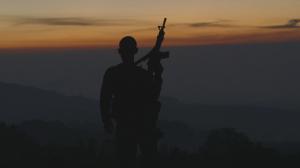 This is an interesting look at the way individuals are fighting to stop the drug cartels of South America. Specifically, the film focuses on efforts being made on both sides of the United States/Mexican border. Directed by Matthew Heineman (Our Time), the documentary gets in close with some interesting characters involved in the struggle. The strength of the documentary is in the access they gained into some of the activities of the subjects. In Arizona, the documentary followed a group called the Arizona Border Recon who patrol the border with a military-like approach. The leaders of the group provide some interesting insights into the way they view the governments of both the United States and Mexico as it relates to the cartel problem. 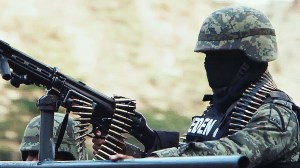 Another group that the documentary highlighted was the Autodefensas. This group, like the vigilantes in Arizona, was working outside the law to supplement the efforts the government was making. Like the Arizona group, this group also had a unique perspective on the efforts of the governments involved. Unlike the footage from Arizona, the images from Mexico are far more intense. From graphic images of the aftermath of cartel justice, to the efforts of the Autodefensas, the film doesn’t hold back. 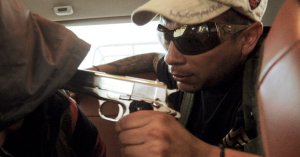 Perhaps the most interesting part of this documentary was the way the groups were allowed to portray themselves. Both groups saw themselves as the last line of defense for their communities. Both groups also put forth a set of ideals that they believed they were upholding. In contrast to their contributions, the film was able to shed light onto the other side of these groups. This payoff really hits home, and helps to address the problems that the United States and Mexico have had in the fight against the cartels. The weakness of this documentary is the lack of contribution from any law enforcement or government officials. Seeing two private groups at work doesn’t seem to acknowledge the problems and the benefits that exist because of government efforts.

This film earned an Oscar nomination for Best Documentary Feature. If you’re a fan of documentaries on war or crime this is one to see. This is certainly worth watching if you’re interested in the truth behind the war with the cartels. This is a graphic and intense film at moments, so it might not be for everyone. I give this one 3.5 out of 5 stars.