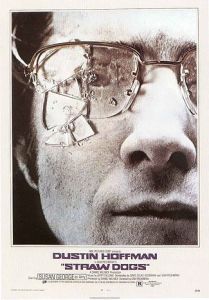 Based on the novel The Siege of Trencher’s Farm by Gordon M. Williams

A young American professor (Hoffman) and his English wife (George) have taken up residence in a small country home in rural England. Soon they become the target of escalating harassment from a group of local men.

This film is based on the 1969 novel, The Siege of Trencher’s Farm, written by Gordon M. Williams. The adaptation was completed by the film’s director, Sam Peckinpah (The Wild Bunch) and screenwriter David Zelag Goodman (Love and Other Strangers). The film stars Dustin Hoffman (Midnight Cowboy), Susan George (Mandingo), and Peter Vaughan (Brazil). 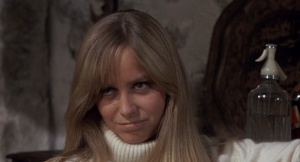 It’s important to take this story as a whole. When the film came out many critics were immediately focused on one of the more visceral moments. The rape scene in this film is a prolonged and intense series that serves as a major plot point for the entire story. (This does not spoil the plot.) Moving past that, this is a very unique story that plays with questions of manhood, self-respect, and self-preservation. The somewhat immature relationship between David and Amy (Hoffman and George) is captured wonderfully in the early moments of the movie. This helps to create an interesting foundation for the rest of the story. As the intensity builds, their relationship flaws pay off in some great moments. This movie has the feel of one written with a need to limit dialogue. This put a lot of pressure on the actors to understand the tone of every scene. Overall, this is one of the more intense stories you might see played out on film. The payoffs are great, but this is not a story for everyone.

The acting in this movie is very good. Dustin Hoffman does a great job as the subdued and passive David. Throughout the movie his part asked for non-verbal responses to many unique situations. Hoffman rose to the challenge, truly understanding the needs of the moment. He also found the right moments to bring out the intensity within his character. These physical and emotional flashes come at all the right moments in the film. He also found the right way to connect with Susan George. Their moments on the film feel just right for a newly married couple. George was tasked with playing a somewhat immature and impatient new wife. She does a good job finding the right ways to do this without becoming annoying. She also does a great job with the more intense physical and emotional moments of the film. Peter Vaughan is just one of several others who bring something unique to the movie. Like all good thrillers, this one needed the right antagonists. Overall, the acting did a great job with this story. 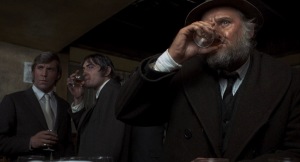 This movie was filmed in a way that puts you right in the middle of the action. This creates moments that are awkward and uncomfortable, but also helps to connect the audience to the characters. The subdued color scheme of the film also adds a very Hitchcock-like visual styling to the movie. Unlike most Hitchcock, this one doesn’t just imply violence. The camera doesn’t look away, even in the most intense moments of the movie. If you’re uncomfortable with graphic images, this is one to avoid. The other aspects of the movie are also nicely put together. Jerry Fielding (The Bad News Bears) did an excellent job putting together the score for this one. His work earned the film its only Oscar nomination, for Best Original Score. 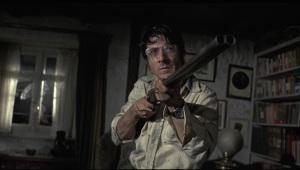 This is a very good movie, but not one for a wide audience. The intense nature of the story, accompanied by graphic visuals, makes this a tough watch. If you’re still interested, I would encourage fans of thrillers and crime dramas to check this one out. This is also a good choice for fans of Peckinpah. I give this one 4 out of 5 stars.