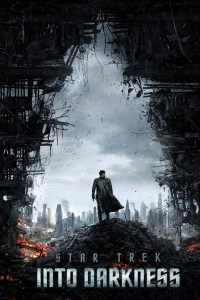 Based on the television show Star Trek created by Gene Roddenberry

A terrifying enemy was revealed after a deadly attack strikes at the heart of the Federation. Now Captain Kirk (Pine) is taking the Enterprise on an intergalactic manhunt after a terrifying one-man weapon.

This is the followup to the 2009 film, Star Trek, and the 12th film in the Star Trek world. This movie was created within the world originally designed for the Star Trek television series by Gene Roddenberry. The screenplay for this film was written by Roberto Orci (Mission: Impossible III), Alex Kurtzman (Transformers), and Damon Lindelof (Prometheus). Returning to the series was director, J.J. Abrams (Super 8). The cast for this one includes Chris Pine (Unstoppable), Zachary Quinto (Margin Call), Zoe Saldana (Avatar), Benedict Cumberbatch (The Imitation Game), and Simon Pegg (The World’s End).

This story picks up shortly after the end of the 2009 film. The characters are all re-introduced early in the film, making way for the plot to kick off. The story is good, but not great this time around. While this isn’t a predictable movie, the writing seems to stray too far from the main arc. There are several moments that seem to halt the pace of the movie to focus on things that aren’t essential to the story. The setups and payoffs also feel slightly disconnected due to the way the film plays out. The dialogue is solid, but suffers from the many diversions in the movie. Overall, this is an okay script that seems to be a combination of hits and misses.

The acting in this one is actually pretty good. The familiar faces and new stars all come together to create some great moments. To some extent the acting actually elevates the material. Chris Pine does a great job stepping back into the role of Captain Kirk. His performance includes some intense drama as well as some more comic moments. He also has really good chemistry with all of his co-stars. That chemistry is never better than the connection between him and Zachary Quinto. Quinto does a wonderful job handling the unique personality of his character. He also makes the most of the sometimes awkward interchanges between himself and the other characters.

Zoe Saldana, Simon Pegg, and the rest of the cast all help to bring this one to life. These stars all handled the emotional intensity of this story nicely. Their work also helped to make the most of the lighter moments in the film. Perhaps the biggest impact made on this film was the addition of Benedict Cumberbatch. His performance as the antagonist in the story really stands out. He does an excellent job with the action work in this film. He also has some very intense moments that heighten the drama of the movie. Despite a weaker script, the acting does some good things throughout this one.

This film is a big-budget action flick with visuals to match. The action sequences are intense, and the stunt work is very nicely done. The CGI work done in this one is also very good. The world of this film relied heavily on the look to make this feel genuine, and the visuals succeeded. The movie was eventually nominated for an Academy Award for Best Visual Effects. Overall, the production value of this one cannot be denied. This looks and sounds pretty great.

This movie has some serious story and editing issues that unfortunately hinder the pace throughout. The acting and the visuals both help to overcome some of these moments. If you’re a fan of the Star Trek films or the series, this is one worth checking out. I would also suggest this to fans of the main stars. I would caution people to be patient with this movie. The awkward pacing might be a bit of an issue, but the action sequences and payoffs are still fun. I give this one 3.3 out of 5 stars.