On the last day of summer camp, a group of counselors set out to wrap up their unfinished business with one another. 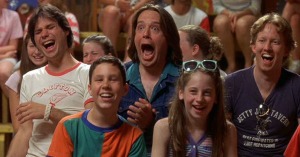 This oddball satire was written by Michael Showalter (The Baxter) and David Wain (Wanderlust), with Wain also directing the film. The cast features a ton of familiar faces. Janeane Garofalo (Ratatouille), David Hyde Pierce (The Fisher King), Paul Rudd (Ant-Man), Amy Poehler (Inside Out), and Bradley Cooper (American Sniper) are just a few.

This story is a mix of coming-of-age, raunchy sex, screwball comedy, and more. The writers did a nice job bringing a weird version of 1981 to life for this one. The comedy in this one feels like a mix of SNL skits and coming-of-age jokes. The funniest moments come in the less over-the-top scenes throughout this one. This is mainly due to some sharp and nicely delivered dialogue. The less successful moments are often the more outrageous ones in this film. These moments unfortunately come up too often in this one. As a whole, this script has a lot of high and low points. The highs are laugh-out-loud moments, while the lows might bring some groans. Overall, this one is only a decently written film.

The actors do some good work in this film despite the weaker writing. There isn’t really a standout star in the film, with good moments coming from everyone. Garofalo, Pierce, Rudd, Poehler, and Cooper all latch on to some of the more odd characteristics of their roles. There are also a number of other actors who brought unique performances to this one. Due to the writing, there really isn’t anyone who stood out more than the rest. None of the stars really seemed to elevate the weaker moments in the script. Like the writing, this is a mixed bag of good and less good moments. 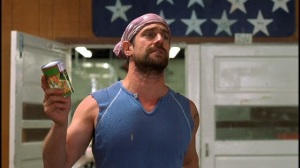 This is a forgettable movie that fails as often as it succeeds. While it has some good laughs built in, it just doesn’t offer enough to be considered more than an okay movie. Fans of the actors might enjoy moments in this one, but I don’t think I’d recommend this to many people. I give this one 1.5 out of 5 stars.