Based on characters created by Chester Gould

Detective Dick Tracy (Beatty) has found himself in the midst of a complicated situation. On one side, Breathless Mahoney (Madonna) has begun to make advances. On the other, Big Boy Caprice has decided to go to war against Tracy in an effort to secure his criminal empire.

This film was ripped right from the pages of Chester Gould’s classic comic strip of the same name. The screenplay was written by Jim Cash (Top Gun) and Jack Epps Jr. (Turner & Hooch). Warren Beatty (Reds) both directed and starred in this one. The cast also included Al Pacino (The Insider), Madonna (A League of Their Own), and Dustin Hoffman (Straw Dogs).

This movie was written with a clear sense of connection to the source material. Jim Cash and Jack Epps Jr. did a great job accentuating the unique 1930s styling into the story. The character names alone seem to come from a bygone era where the comic strip was king. Names like Mumbles, Sam Catchem, Flattop, and Pruneface are scattered throughout the film. The dialogue also follows this style with witty lines that feel like they’d be at home in film noir or a classic radio show. The story has fun twists and little moments that give this one great charm. After more than 25 years and dozens of comic book adaptations, this is still an enjoyable movie.

The actors cast for this film all did a great job latching onto the style that Warren Beatty was after. The performances are sometimes campy, but always fun. Warren Beatty does a great job with the title role in the film. His performance allows room for both humor and intense determination. He also seemed to find good chemistry with all of the other actors in this one. His work was met with an incredible performance by Al Pacino. He was given a unique role and he brought out all of the eccentricities and energy that the character required.

Pacino’s work earned him an Academy Award nomination for Best Supporting Actor. Madonna also did nice work in this one. In one of her early film roles she was able to hold her own with the seasoned actors around her. Dustin Hoffman also delivered with a smaller but impressive performance in this one. His work as Mumbles is perfect for the style of the film. Overall, this one has a number of fun performances from a long list of great actors. 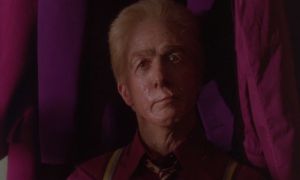 This movie looks like a comic strip come to life. The visual styling utilized bright colors and 1930’s style to create a new world. The makeup work, costumes, and sets all add to this unique creation. For their efforts, this film won Oscars for Best Set Decoration and Best Makeup. The production also earned nominations for Best Costume Design and Best Cinematography. Aside from the visuals this one also had a number of other successes. The movie won a third Oscar for Best Original Song for “Sooner or Later (I Always Get My Man)” by Stephen Sondheim (Reds). Additionally, this film was nominated for Best Sound, rounding out the totals at three wins from seven nominations.

This movie looks great, sounds great, and is a ton of fun. It has help up wonderfully over the past 25 years. If you’ve never seen this one you should make the time. I would also recommend this to those who remember seeing it in 1990. This movie is a great example of how a comic strip can be translated effectively for film. If you’re a fan of comic book movies this is one you might enjoy. I would also suggest this to fans of the stars. I give this one 4.5 out of 5 stars.