Showgirl Flaxy Martin (Mayo) is in over her head. Now she’s hoping that her lawyer Colby (Scott) and mobster Hap Richie (Kennedy) will help her get out of it.

This 1949 film is a great example of the lesser known film noir released throughout the 1940s and into the 1950s. This one was directed by Richard L. Bare (The Storm Riders), best known for his work on the television show Green Acres. The screenplay was written by David Lang (Hellcats of the Navy). The film stars Virginia Mayo (The Best Years of Our Lives), Zachary Scott (Mildred Pierce), and Douglas Kennedy (Dark Passage).

This is a good story with one of the more interesting and despicable antagonists you’ll come across. The title character is a devious woman with a knack for working her way out of a jam. The writing is good, but does seem a bit campy at times. Additionally, the film doesn’t have any true surprises throughout the story. Despite all of the campy predictable turns the story takes, it’s still a lot of fun. The dialogue is witty at times without being cute. The screenplay also mixes in some more gritty moments that bring out the darker sides of many of the characters. This isn’t a great movie, but a very fun example of film noir. 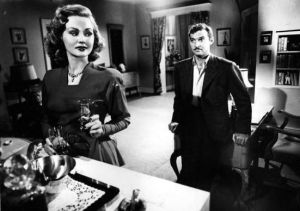 The acting in this one is decent. Virginia Mayo did a great job with the title role. She seemed to have fun with both sides of her femme fatale. In the more devious moments Mayo is able to bring out the cold heart of Flaxy Martin. She was also able to tone that down for the more helpless moments in the movie. Zachary Scott does a nice job playing a somewhat stereotypical role in the movie. His performance seems to highlight the true character of the people around him. Douglas Kennedy also did a nice job playing the mobster and playboy, Hap Richie. These three provide the best acting in the film, which doesn’t have much help from the supporting cast. The acting in this one is a mixed bag with a handful of good performances from the three mentioned above.

This movie plays within the visual styling expected from most of the 1940s film noir. There isn’t anything new of different that set this apart from a visual or audio standpoint. If you’re a fan of film noir, this is one you should see. I would also suggest this one to fans of Mayo. Her performance really elevates the story. This is a fun story and a good example of a great genre. I give this one 2.6 out of 5 stars.