Roger Murtaugh (Glover) and Martin Riggs (Gibson) are partners, but they couldn’t be more different. Newly partnered, they’re assigned to uncover the truth behind the murder of a young woman. The trail soon leads them to a drug smuggling operation that’s closer to home than they expect.

When you think about buddy cop movies, Lethal Weapon is one of the gold standards in the genre. The film was released in 1987, eventually grossing over $950 million dollars. The story was written by Shane Black (Iron Man 3) and directed by Richard Donner (The Omen). Mel Gibson (Braveheart) and Danny Glover (The Royal Tenenbaums) head up a cast that also features Gary Busey (Rookie of the Year). 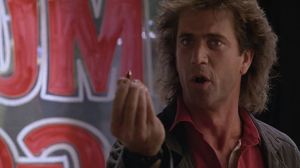 This story really stands out as one of the better buddy cop films ever written. Along with films like 48 Hours, this movie found a great blend of comedy and action that really works. This film has such a great range of story elements that makes it a great watch. From suicide and drug addiction to goofy comedic moments and good old-fashioned action this one has it all. The dialogue is witty but also able to dig deep into the emotional core of the characters. Set in the heart of Los Angeles, the story also uses the city as a perfect backdrop for the action. Speaking of the action, this one has plenty. Don’t let the earlier statements about emotion mislead you. This one has explosions, gun fights, punching, kicking, and all manner of violence for the action movie fan. This story is such a fun ride, and it has held up wonderfully after almost 30 years.

The acting in this movie really makes this one great. With such a good script, it was the casting that really gave this one something special. Mel Gibson was a great choice to play Martin Riggs. His ability to play such a huge range of emotions really gives this film an added depth. Danny Glover was also the right choice for this movie. His performance as a veteran cop really helps with the comedic side of things. Their chemistry is where this one really comes together. Throughout the movie these two trade little jabs that really keep things fun. One of the many cast members who’s there to help things along is Gary Busey. He does a great job playing one of the villains in the story. Overall, this cast did a great job with the story.

This movie plays out on the streets of Los Angeles. The camera work really captures the city nicely at each of the many great locations. The action is also nicely done. The movie stunts have a big-budget feel that creates some intense moments. The film earned an Oscar nomination for Best Sound as well. The production work did all the right things, and this one holds up wonderfully. If you’re a fan of the stars you should definitely check this one out. If it’s been a while, check it out again. This is also a good choice for anyone who loves a good blend of action and comedy or a good buddy cop film. I give this one 4.5 out of 5 stars.