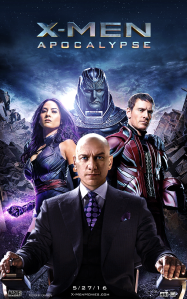 The world’s first mutant (Isaac) has emerged after centuries of silence. With his terrifying plan in motion, the X-Men must come together to save the world.

This film is the ninth in the X-Men comic book film series, and the followup to 2014’s X-Men: Days of Future Past. Simon Kinberg (Sherlock Holmes) penned the screenplay using a story he helped to create along with Bryan Singer, Michael Dougherty (Krampus), and Dan Harris (Superman Returns). Bryan Singer (X-Men: Days of Future Past) also returned as director, having previously directed three other X-Men films. The cast brings in some familiar faces, and some new ones as well. James McAvoy (The Conspirator), Michael Fassbender (Steve Jobs), Jennifer Lawrence (Silver Linings Playbook), and Oscar Isaac (Ex Machina) are just a few of the stars.

This story picks up right where the last film left off. After a solid opening sequence, a number of scenes are used to re-introduce the many characters important to the story. This is a necessary evil of a film with this many moving parts. Unfortunately, this leaves the movie feeling sluggish early on. Once the introductions are complete this one gets going nicely. There are a number of incredible action sequences that really play nicely. There are also a few surprises along the way that will make X-Men fans very happy. The story also seems to dig a little deeper into the emotional background of several characters. There are some gritty moments that really feel dark compared to the rest of the film. As a whole, this story has some issues with keeping the pace going. There is also a bit too much information packed into the story. This necessitated a longer film that unfortunately feels long. While this is a good story with some great moments, it’s not a great story.

This film features some very good performances from a number of the cast members. Michael Fassbender leads the way with the best work in the film. He nailed the emotional moments in the film as well as the action. James McAvoy, Jennifer Lawrence, and Oscar Isaac also did nice work in this one. Their solid performances all helped to tell the story. With such a huge cast there were some weaker performances in this one. That isn’t to say that there were bad actors cast, just performances that didn’t match the higher quality of the actors named above. The overall performance by the cast is good, but only a handful of the actors really elevated the material.

This movie looks great. Despite any issues I had with other aspects of the movie, there isn’t anything to complain about with the visuals. The action sequences are seriously impressive. There is also another great sequence featuring Quicksilver that will definitely get your attention. The CGI and practical stunt work come together nicely to create an intense experience that feels right for the world of the X-Men. The makeup and costuming also do their part in making this story come to life. The score is also nicely done, accenting the right highs and lows throughout the film. The overall production value of this film is top-notch. 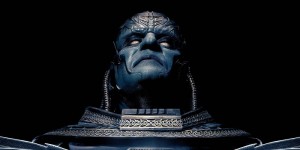 This movie is a good movie, but definitely not a great one. Despite the issues, the successes definitely outweigh the flaws. Fans of the X-Men movie series will find a lot to like about this one. I would also recommend this to fans of comic book movies in general. This is a fun movie, but it does require a bit of patience. I give this one 3.5 out of 5 stars.