Willie Stark (Crawford) has been witness to the corruption elected officials. When he’s asked to run for governor, this small-time lawyer is swept away by the machinery of the political system. Soon Stark is part of the very system he fought against, and those who aren’t with him begin to find out what it means to be against him. 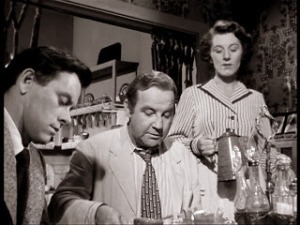 This movie is based on the Pulitzer Prize-winning novel of the same name which was penned by Robert Penn Warren (Band of Angels). The screenplay was written by Robert Rossen (The Hustler), who also directed the film. The cast of this film includes Broderick Crawford (Born Yesterday), John Ireland (Red River), Joanne Dru (She Wore a Yellow Ribbon), John Derek (Exodus), and Mercedes Cambridge (The Exorcist). This is a classic movie that would eventually earn seven Oscar nominations with three wins including Best Picture. 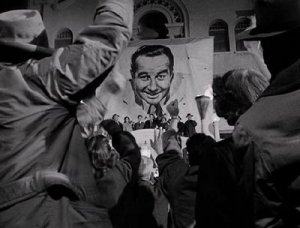 The story for this film was culled from the Pulitzer Prize winning novel of the same name. Robert Rossen took Robert Penn Warren’s story and created something special. The writing does a wonderful job painting a picture of a small-town lawyer who would become too powerful.  The simplicity of the story is what really makes this one work. By keeping things simple, the writing allowed for the cast to dig deep into the handful of great moments for each role. The dialogue in the movie is strong and direct, sometimes a little shocking for a 1949 film. The little twists and turns really help this one to come alive as well. For his work, Rossen was nominated for Academy Awards for Best Writing, Screenplay, and Best Director. He would lose out to A Letter to Three Wives and Joseph Mankiewicz. Overall, this one holds up really well after more than sixty-five years. If you’re looking for a powerful political drama, this is one to check out.

The acting in this film is incredible. Broderick Crawford leads the way with an intense and emotional performance as the politician, Willie Stark. He was able to adjust his performance throughout the film to evolves from small town lawyer to big-time politician. He also knew how to adjust his interaction with the other actors in the film. This helped to raise the emotional intensity of the story. John Ireland does an equally good job with his work in this one. His character also goes through an evolution of sorts, and it really pays off. Mercedes McCambridge also does incredible work in this one. Like the others, she did a great job evolving her performance throughout the film. The cast also benefited from nice performances from Joanne Dru and John Derek. This cast would be well-recognized for their work in this film. Broderick Crawford would go on to win his only Oscar, for Best Actor, for his work in this one. Mercedes McCambridge would also take home a statue for Best Supporting Actress. John Ireland would earn a nomination for Best Supporting Actor.

This one features a wonderful score, written by composer Louis Gruenberg (Quicksand). The music seems natural to the settings of the film. From the rural farming communities to the big city, the music seems to fit in perfectly. The movie also benefits from the cinematography of Burnett Guffey (From Here to Eternity). The visuals are dynamic and somehow energetic. Like Citizen Kane, the film seems to find incredible angles to examine the subjects in front of the camera. The film’s seventh Oscar nomination came for Best Film Editing. Overall, this one looks and sounds great. 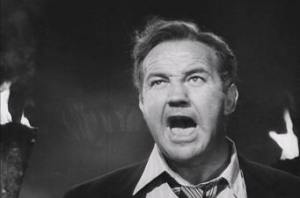 This is a classic film about politics that seems to go the opposite direction of Mr. Smith Goes to Washington. If you’re looking for a Capra-esque tale of good versus less good, this isn’t the film for you. This movie is a deep drama with great performances that take advantage of the excellent script. If you’re a fan of the stars or the people behind the scenes, this is one to see. I would also suggest this to anyone who likes political films. I give this one 4.5 out of 5 stars.