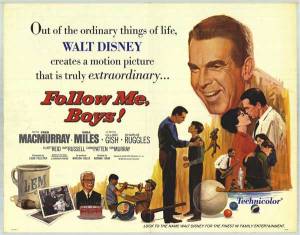 Based on the book God and My Country by MacKinlay Kantor

Lem Siddons (MacMurray) has been on the road as a musician for a long time. With his dream of becoming a lawyer in mind, he settles down in the small town of Hickory. After being enlisted as the Scoutmaster for the local Boy Scout troop, Lem begins to connect with the young men of the town.

This film has the sad distinction of being the last live-action film produced by Walt Disney. The movie actually premiered about two months after his death. This movie was based on MacKinlay Kantor’s (The Best Years of Our Lives) book God and My Country, which he published in 1954. Louis Pelletier (Big Red) adapted the book for the film. Norman Tokar (Candleshoe) directed the movie. The cast includes Fred MacMurray (Double Indemnity), Charles Ruggles (The Parent Trap), Vera Miles (The Man Who Shot Liberty Valance), Lillian Gish (The Night of the Hunter), and Kurt Russell (The Hateful Eight). 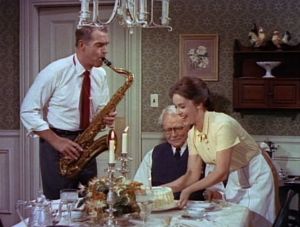 This is a sentimental story, told on the backdrop of a small town beginning in the 1930s. Louis Pelletier took MacKinlay Kantor’s book and turned it into 131 minutes of nostalgia and good feelings. Despite the overwhelming sense of nostalgia, the story isn’t as sappy you might expect. The film lives mostly in a comic sphere, taking only small moments to get serious. Those moments really bring out the heart of the film. The dialogue is simple and sometimes predictable, but never really feels badly written. If there is any real criticism to be made, it is the length of the script. At over two hours, this one can feel a little slow at times. Despite the length and predictable nature of the story, this is still a fun one. Like most Disney films of the era, this also carries a great message.

This film features some of the big names that Walt Disney so often used in his work. Legendary actor Fred MacMurray does a great job in the lead role. Despite being almost sixty at the time, he was asked to play a much younger man throughout much of the movie. He was able to handle the younger version of his role, and also did a nice job aging him throughout the film. He was joined by Charles Ruggles, a frequent Disney collaborator. Ruggles does a great job playing a role that feels written for him. Playing opposite MacMurray is Vera Miles. Her performance in this one does all the right things. She seemed to understand both the comedy and the heart of the story. Lillian Gish and a very young Kurt Russell also add something special to this one. The entire cast does a good job throughout this one.

This is a fun and heartwarming film that drives at its message with vigor. Fans of these classic live-action Disney films should make sure to check this one out. I would also suggest this one to fans of any of the stars. Despite being a bit predictable and overlong, this is one I really had fun with. It would be a great movie for a family movie night. I give this one 3 out of 5 stars.