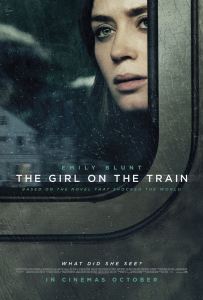 Rachel (Blunt), a troubled divorcee, becomes involved with a complicated missing persons. As the police search for clues they begin to find unexpected connections between everyone involved. 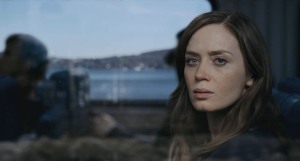 This suspense film was drawn from the 2015 novel of the same name, written by Paula Hawkins. The screenplay was written by Erin Cressida Wilson (Secretary). The movie was directed by Tate Taylor (The Help). The film stars Emily Blunt (Sicario), Justin Theroux (Zoolander 2), Haley Bennett (Music and Lyrics), and Rebecca Ferguson (Mission: Impossible – Rouge Nation). Luke Evans (The Hobbit: The Battle of the Five Armies), Edgar Martinez (The Bourne Ultimatum), and Allison Janney (The Duff) are also featured.

The story for this film came from the debut novel by Paula Hawkins. The adaptation was done by Erin Cressida Wilson. The writing on the film does a nice job building suspense early on. The mystery builds because there is little given about any of the main characters. 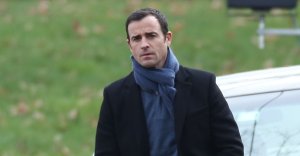 Throughout the film the movie reveals small pieces of the puzzle, adding to the intensity of the conclusion. The strength of the writing is the way the little details are slowly revealed. Despite the slow release of information, the pace of the movie doesn’t suffer. The story does have a somewhat predictable ending, but the overall experience doesn’t suffer too much. While this isn’t a perfect story, it’s an enjoyable one. 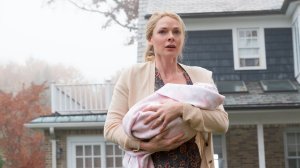 The acting really helps to make up for the weaknesses in the writing. Emily Blunt leads the way with one of her best performances. Her role required an ability to connect with the tremendous flaws in her character. She did a great job with that, and her performance really stands out. Her performance is complimented by the work of Justin Theroux, Haley Bennett, and Rebecca Ferguson. Each of these actors found the right tone for their performances. Luke Evans, Edgar Martinez, and Allison Janney also add nice performances to this one. The cast seemed to understand the dark themes of the film, and used those tones to tailor their performances. The acting in this one will not disappoint.

The production work in this one does all the right things to keep the suspense working. Cinematographer Charlotte Bruus Christensen (The Hunt) did a nice job creating the visual tension a film like this required. Veteran composer Danny Elfman (Big Eyes) added his own touch with an excellent score for the film.

This is a good suspense film that falls short of great due to the slightly predictable nature of the story. The acting does a great job elevating the material and really making some great moments. If you’re a fan of any of the stars this is one to see. I would also suggest this to fans of psychological dramas or suspense films. I give this one 3.8 out of 5 stars.