Based on the book “Never Go Back” by Lee Child

Trying to clear his name, Jack Reacher (Cruise) is on the run from the government. As he seeks out proof of his innocence Reacher discovers a dangerous conspiracy. He also finds that his past catching up with him in unexpected ways.

This film is the second in the series of Jack Reacher films, and an adaptation of the 18th Jack Reacher book in the series by Lee Child. The book was adapted by Richard Wenk (16 Blocks), Edward Zwick, and Marshall Herskovitz (The Last Samurai). Edward Zwick (The Siege) also worked as the director for the film. The film brings back Tom Cruise (Mission: Impossible – Rogue Nation) in the title role, and introduces Cobie Smulders (Avengers: Age of Ultron) and Aldis Hodge (Straight Outta Compton) to the mix. 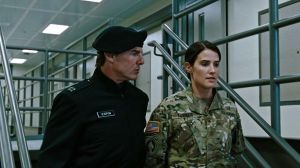 This film is the second movie to be pulled from the lengthy book series penned by Lee Child. The story is a fun action-adventure romp that lives in the world of government conspiracies and shady characters. The story isn’t complicated, and often feels predictable. Yet the action is somewhat unpredictable, which makes this a pretty fun movie to watch. Making the action was a great decision since the twists and turns of the story are often built around intense moments. While this isn’t an incredible story, it does enough to make things fun for the entire length of the film.

The acting in this one is fun and seems to fit right in with the story. Tom Cruise does a good job making this one exciting and intense, without trying to duplicate the feel of his work on the Mission: Impossible films. In fact, the major concern I had was that this would feel like an extension of those movies. Luckily, he does a nice job setting this role apart. The action demanded a lot of physical work from Cruise as well as the rest of the cast, and they all handled it nicely. Cobie Smuthers also does a good job with her role in this one. She’s not a natural for this type of role, so there are some rough moments. Aldis Hodge, on the other hand, does a nice job sliding into character for this one. While the acting isn’t memorable, it does enough to bring out the fun of a story like this. 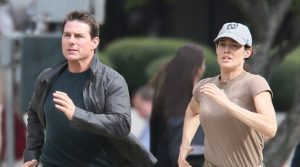 This one is a fun movie with a lot of cool stunts and excellent fight scenes. Fans of action-adventure films should definitely check this one out. I would also suggest this to fans of Tom Cruise. While there are some issues, there’s enough to like to make this one worth checking out. I give this one 3.4 out of 5 stars.