Desmond Doss (Garfield) is a conscientious objector who wants to serve his country during World War II. His unwillingness to take up arms soon leads to conflict that challenges his beliefs and convictions.

This film is based the true story of Desmond Doss and his service in the military. The fascinating tale was translated into a script by Robert Schenkkan (The Quiet American) and Andrew Knight (The Water Diviner). Academy Award winner Mel Gibson (Braveheart) directed the film. The movie stars Andrew Garfield (Silence) and features performances by Sam Worthington (Avatar), Hugo Weaving (The Hobbit: The Battle of the Five Armies), Rachel Griffiths (Saving Mr. Banks), and Teresa Palmer (Triple 9). This film was nominated for six Oscars including Best Picture and Best Director. 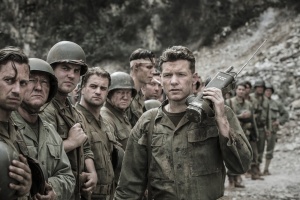 This is an amazing story if it’s read right from the history books. Robert Schenkkan and Andrew Knight did a great job bringing that history to life. The story could’ve easily been a political message piece, but the screenwriters knew better. Instead of canned messages and sentiment, the film deals with the realities of the moment. The story stays focused on the major events in the life of Doss that led him to become the man he was. Like all good war films, this one also did a great job connecting the audience with the men in battle. The emotional highs and lows of this film really pay off in the end. Overall, a great war movie that honors a great man.

The acting in this film is really good. I’d be lying if I said that I was a fan of Garfield prior to this movie. After seeing his performance I’ve been converted. He handled the lead role in this movie with skill and a deep understanding of the emotional depths he needed to reach. Alongside Garfield were a number of talented actors who all did good work. Sam Worthington, Hugo Weaving, Rachel Griffiths, and Teresa Palmer are just a few of the standouts in the film. The entire cast felt committed to the story, which brought out the best and (if needed) the worst of each character. There isn’t a lot to complain about from an acting point of view. With a good script, the actors worked their craft and made a great film. Andrew Garfield was also honored with an Oscar nomination for Best Actor. 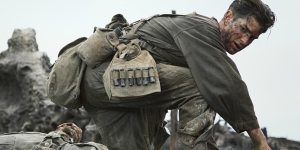 This movie features some intense action and graphic violence, all designed to highlight the horrors of war. The camera work, stunts, and special, effects all added great things to this one. Additionally, the film features great costuming, sets, and locations. Rupert Gregson-Williams (Wonder Woman) composed an excellent score for this film as well. From a production standpoint there’s a lot to like. The film was nominated for Best Editing, Best Sound Editing, and Best Sound Mixing.

This is a solid war movie that seeks out one character to follow instead of a band of men. It’s an interesting approach that works nicely. Fans of Garfield or any of the stars should check this one out. This is also worth seeing if you’re a history or war movie fan. Biopic fans should also add this to the list. This is a graphic film, so it might not work for everyone. Overall, this is an impressive movie. I give this one 4.6 out of 5 stars.