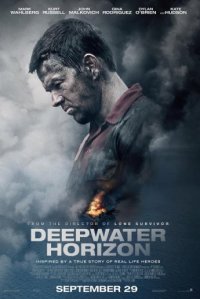 The story of the events aboard the drilling rig Deepwater Horizon that led to the largest oil spill in United States history.

This story is a Hollywood dramatization of real events that occurred on the Deepwater Horizon in 2010. The writing, like most similar films, starts with a nice series of character introductions. After that the story jumps right into defining the rights and wrongs of the story. The writing draws a clear line between the corporate leadership and the blue-collar men on the rig. Once this line is drawn the story jumps into the action.

The action is the clear highlight of this movie. There is a nice buildup of tension, but once the action starts it doesn’t really let up. The film doesn’t have great dialogue, but most films like this don’t. (Think Unstoppable if you need proof.) The end result is an entertaining movie that offers good action, someone to hate, and people to cheer for. It works well enough for the genre it belongs in.

The acting in this works like the story. The introductions and buildup are fine, but the best moments come from the action. Mark Wahlberg does a good job, but it’s not anything special. His performance is all about the action, with a few nice moments slipped into the early parts of the film. Kurt Russell is better suited for the early moments in this one. While Wahlberg carries the later moments, Russell handles the earlier ones.

One of the other nice performances of the first act came from John Malkovich. He manages to embody all of the corporate greed the writing needed him to. Beyond these people there are a handful of okay performances from people like Kate Hudson and Gina Rodriguez. While the acting isn’t bad, there just isn’t a lot to work with for most of the actors.

This one is really all about the action. The visuals do a lot in making this a watchable movie, especially when the sappy dialogue creeps into the action sequences. The CGI and stunt work combine for some really intense moments. The sound work also does a lot to make this one exciting. The film earned Oscar nominations for Best Sound Editing and Best Visual Effects.

This is a fun movie with some intense moments. While it lacks in substance that shouldn’t keep action fans from checking it out. I would also suggest this to fans of Mark Wahlberg. This does get pretty gritty at times, so be prepared for some gruesome injuries along the way. I give this one 3 out of 5 stars.