Based on the book The Finest Hours: The True Story of the U.S. Coast Guard’s Most Daring Sea Rescue by Casey Sherman and Michael J. Tougias

When a blizzard rips an oil tanker apart off of Cape Cod the Coast Guard is called to action. Despite the odds, the men in the rescue team fights to save the crew of the tankers.

This film is based on the true story told in the book The Finest Hours: The True Story of the U.S. Coast Guard’s Most Daring Sea Rescue. This book was written by Casey Sherman and Michael J. Tougias. The adaptation was completed by screenwriters Scott Silver (8 Mile), Paul Tamasy (The Fighter), and Eric Johnson (Patriots Day). The film stars Chris Pine (Hell or High Water), Casey Affleck (Manchester By The Sea), Ben Foster (Lone Survivor), Eric Bana (Munich), and Holliday Grainger (Cinderella). The film was directed by Craig Gillespie (Million Dollar Arm). 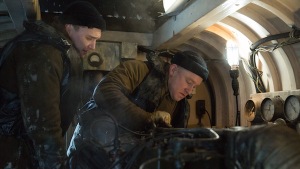 This film takes an incredible true story and brings it to life. The writers used the framework of the book by Casey Sherman and Michael J. Tougias to tell their story. The script wisely takes on the story from multiple perspectives. This allows the action to take on a real-time feeling that keeps the pace moving. While the action in this is nicely played, the film doesn’t hold many surprises. This makes this a somewhat predictable movie that winds up with one too many feel-good moments. The dialogue is solid, but it also seems to push the characters into caricatures of people instead of portrayals of real people. While this is a fun movie with some exciting moments, it just doesn’t pack a punch. 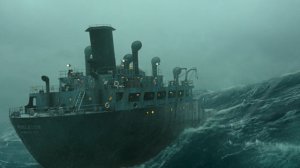 The acting in this movie is solid. Each of the stars did their best to work with material that was less than perfect. Chris Pine does a nice job as the lead in the film. He’s helped by nice performances by Casey Affleck, Ben Foster, and Eric Bana. Holliday Grainger gives a less inspiring performance that might have suffered more due to the material than her own abilities. The writing forced the actors into character types that are all too familiar to be memorable. Despite the weaknesses in the story, this one does have good moments from the stars.

This is a decent movie that fits right in with the Disney Studio of today. It’s a safe and predictable romp that leads towards an ending that is filled with inspiration. What it’s missing is that memorable twist or powerful moment that elevates the material. The special effects and production work are all fine in this one, but there just isn’t anything new going on. Fans of the stars might enjoy this one. I would also recommend this one to fans of biographical films or safe adventure movies. I give this one 2.5 out of 5 stars.