Based on the novel Brooklyn by Colm Tóibín

Eilis (Ronan) is an Irish immigrant looking to build her life in Brooklyn. As she begins to establish herself in America, she finds out that her past life in Ireland might have a stronger hold than she expected.

This film is based on Colm Tóibín’s 2009 novel of the same name. Directed by John Crowley (Boy A) with a screenplay by Nick Hornby (About A Boy), this would eventually earn three Oscar nominations including one for Best Picture. The film stars Saoirse Ronan (The Grand Budapest Hotel), Julie Walters (Brave), Domhnall Gleeson (Ex Machina), Emory Cohen (The Gambler).

This movie is a moving and somewhat sentimental look through the eyes of an Irish immigrant moving to America. Screenwriter Nick Hornby adapted the film from Colm Tóibín’s novel. Throughout the film there are a number of very strong moments where the emotion comes to the surface with great success. Thankfully none of these moments use overwritten monologues or the common clichés of films like this. Instead this one just feels honest. The little twists and turns are nice in this one, but it remains a little predictable. This also moves very slowly, so there is some patience required. Overall, it’s a nicely written film with a number of great moments. This one earned Nick Hornby an Oscar nomination for Best Adapted Screenplay. 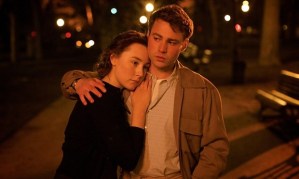 The cast of the film had some nice material to work with, and they did a great job. Saoirse Ronan leads the way in this one with an emotional and honest performance. Her work brings out all kinds of emotions throughout the film. She’s honest, scared, homesick, naive, and always very genuine. Ronan also found great chemistry with all of her co-stars. Julie Walters, Emory Cohen, and Domhnall Gleeson all do excellent work as well. Each of the cast members did an excellent job bringing out the honesty in the movie while allowing it to also feel very nostalgic at times. Thanks to the material and the cast, there isn’t a bad performance in this one. Saoirse Ronan earned an Oscar nomination for Best Actress for her work.

This movie uses set design and costuming with great success. The use of color is especially important to the end result of this movie. Michael Brook (The Fighter) also added a wonderful score to the movie. Cinematographer Yves Bélanger (Wild) added great camera work to this one, especially when it came to capturing the locations the film was shot in. There really isn’t anything to complain about when it comes to the production work on this film.

This film might be a bit slow for some people, but the wait is worth it. The performances are strong and they elevate good material throughout the movie. The visuals are also stunning, and this comes together as a very solid movie in the end. If you’re a fan of the stars this is one to check out. I would also suggest this one to fans of historical dramas and romance. I give this one 4 out of 5 stars.