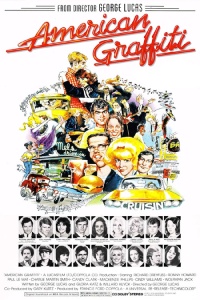 A couple of high school graduates try to squeeze the most out of their last night in town before leaving for college.

This film is one of the early creations in the career of George Lucas (Star Wars). Lucas co-wrote this one with Gloria Katz (Indiana Jones and the Temple of Doom) and Willard Huyck (Radioland Murders). This one features a cast of stars including Richard Dreyfuss (Jaws), Ron Howard (The Shootist), Cindy Williams (The Conversation), and Paul Le Mat (American History X). The cast also includes Mackenzie Phillips (The Jacket), Charles Martin Smith (The Untouchables), Candy Clark (Zodiac), and Harrison Ford (Blade Runner 2049). The film would eventually earn five Oscar nominations including Best Picture and Best Director.

American Graffiti is a classic coming-of-age story. The writing is sentimental and seems to idealize the era the story takes place in. The many stories being told find nice ways to connect with one another. The characters are also varied enough to give almost everyone someone who they can relate to. The little twists and turns of the story are fun throughout this one. The story also avoids feeling like a teen movie despite the subject matter. Overall, this is a fun story with good dialogue and great moments throughout. Lucas, Katz, and Huyck shared in a nomination for Best Original Screenplay.

It’s hard to say that there is a “star” of this one. The actors all do a great job becoming part of the world of the story. The story is really written to benefit the cast as an ensemble, which really eliminates the big moments for any of the stars. This doesn’t mean that there aren’t great moments with each of the actors. These moments just feel like part of the bigger experience. For her work, Candy Clark was nominated for Best Supporting Actress. The main performances are all strong in this one.

This is a fun movie that visually creates an era that doesn’t exist any longer. The sets, locations, and vehicles all add something special to this one. The camera work and all the other elements of the movie work nicely. The movie was also nominated for Best Film Editing. The film also benefits from great music from the era that really helps to create a sense of authenticity. Overall this is a fun movie that is worth checking out. I give this one 3.9 out of 5 stars.