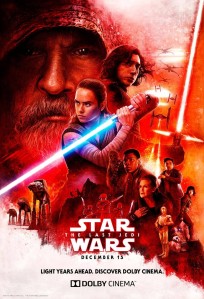 Based on characters created by George Lucas

The Resistance is preparing for another battle with Empire forces. Meanwhile, Rey (Ridley) is looking for guidance from Luke Skywalker (Hamill) as she seeks to understand the powers of the Force.

This film is the 2017 addition to the Star Wars series that began with 1977’s Star Wars: Episode IV – A New Hope. The story is based on the characters and the galaxy created by George Lucas (American Graffiti). New to the franchise, Rian Johnson (Looper) wrote and directed this film. This film stars Daisy Ridley (Star Wars: The Force Awakens), Mark Hamill (Star Wars: Episode V – The Empire Strikes Back), John Boyega (Detroit), Carrie Fisher (Star Wars: Episode VI – Return of the Jedi), Adam Driver (Logan Lucky), and Oscar Isaac (Inside Llewyn Davis).

This story picks up right where The Force Awakens left off, with the galaxy in turmoil. Rian Johnson does a nice job immediately connecting his work to the previous films and understanding the tone of the series. The script has a number of great twists, some bigger than others. The story also continues to dig deeper into the lives of the main characters.

These revelations create a lot of answers and even more questions. There are some things still unanswered, but this one finds a good way to tell a complete story. The dialogue in the movie is good, the action solid, and the characters unique. The only issue with the writing is the clear intention to continue the series. This leads to some moments that are clearly not going to be resolved. Overall, a good addition to the series.

There must be an intense amount of pressure when you’re making a film with Star Wars in the title. Daisy Ridley has become one of the faces of the new generation in this series. Ridley does a great job in this one. Her chemistry with Hamill is evident from the very beginning, and she brings out all of the deep emotions the role needs.

Hamill continues his 40 years as Luke Skywalker with a great performance. John Boyega and Oscar Isaac also do good work with fun roles in this one. Adam Driver comes back with all the rage and intensity his character requires. This film also features the farewell appearance of Princess Leia, done wonderfully by the late Carrie Fisher. This film really shows what an ensemble cast can do. There isn’t a weak performance from the main cast, and there are so many others who add strong work to the film.

This movie has the kind of visuals you expect from a big-budget movie. The action sequences are intense and wonderfully choreographed. The editing keeps the pace moving at just the right speed. (This is especially important since the run time might be a problem otherwise.) The camera work is strong, and avoids a lot of the visual clichés common to science fiction films these days. The music by John Williams helps to solidify this films place in the series. The only issue is the clear effort to set things up in the screenplay for the next film in the series.

Overall, this is a solid production that makes it a great experience overall. I give this one 4.2 out of 5 stars.