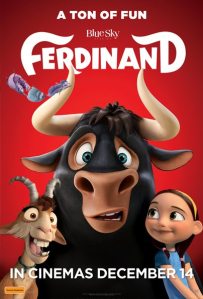 Based on the book Ferdinand by Munro Leaf, Robert Lawson

Ferdinand (Cena) is a bull who doesn’t want any part of a bull-fight. When he is taken from his happy home he sets off on an adventure to find his way back.

This animated film is based on the character created by Munro Leaf and Robert Lawson. Carlos Saldanha (Rio) directed the movie, using a script written by Robert L. Baird (Big Hero 6), Tim Federle, and Brad Copeland (Coffee Town). John Cena (Trainwreck), Kate McKinnon (Rough Night), Bobby Cannavale (Ant-Man), and Anthony Anderson (The Departed) are just a few of the people who lent their voice talents to this one.

This is a whimsical story that is perfectly written for a younger audience. The trio of writers did a good job keeping this one fun and uncomplicated. The casualty of this writing style is that the movie doesn’t have much that will appeal to older audiences. While Pixar tends to make movies with a broad appeal, this film is strictly for kids. There are some fun moments throughout the movie, but nothing that stands out as special or new.

The cast did a decent job bringing this one to life. One of the better performances in the movie came from John Cena, who voiced the title role. McKinnon also did good work, but unfortunately her role felt like a copy of characters from better films. Cannavale and Anderson are just a couple more of the cast members who did solid work on this one. Overall, the cast does solid work with the material.

This movie looks really good. While this might not be a special story, the visuals are very good. The characters are designed wonderfully, and the world of the story is really nice. The rest of the production is also good throughout this one. Surprisingly, this movie did get an Oscar nomination for Best Animated Feature.  In my opinion this is not a great movie, but I would recommend it to anyone looking for something to take their kids to. I would also suggest this to people who love animation. I give this one 3 out of 5 stars.