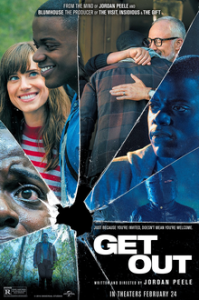 Written and directed by Jordan Peele

A young African-American man (Kaluuya) and his white girlfriend (Williams) are spending the weekend with her parents (Keener, Whitford). The friendly reception he receives soon takes a strange and nightmarish turn.

This movie might have been one of the biggest surprises of 2017. In addition to commercial success, the film earned four Oscar nominations including Best Picture. Jordan Peele (Keanu) wrote and directed this one, earning a Best Director nomination. The cast includes Daniel Kaluuya (Sicario), Allison Williams (College Musical), Catherine Keener (Captain Phillips), and Bradley Whitford (The Post).

This is a nicely written horror film that plays with reality in some different and unique ways. The subtlety of the story is the strength since the film doesn’t give a lot away. The slow burn of the film is nicely handled and the dialogue is solid throughout. The story also shifts gears at exactly the right moment, leading to an excellent conclusion. This one has the kind of elements that create questions for the viewers throughout the movie. Some questions are answered and other left open to interpretation. The success of this script also earned Peele an Oscar nomination for Best Original Screenplay.

The cast did an excellent job with this material. Daniel Kaluuya leads the way with a great performance that really brought out the suspense and horror of the film. Allison Williams also does great work with a complex and interesting part. Catherine Keener and Bradley Whitford also add nice performances to the mix. The interactions between these four create really solid moments throughout the movie as well. The acting from the entire cast really makes this worth watching. For his work, Daniel Kaluuya was nominated for an Academy Award for Best Actor.

This movie features some excellent visuals, thanks in large part to cinematographer Toby Oliver (Insidious: The Last Key). The dynamic visuals work to accentuate the unique brand of tension in the script. Composer Michael Abels (Detroit) also added a nice touch with a solid score. This movie was one of the bigger surprises of 2017 for me. If you’re a fan of horror films you need to make sure to see this one. I would also suggest this one to fans of tense emotional drama and suspense. I give this one 5 out of 5 stars.