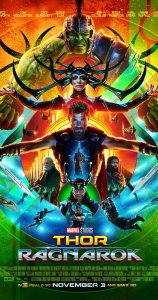 Thor (Hemsworth) must defeat a terrifying threat to Asgard. Held captive in a strange place, he must fight his way out and find a way home so that he can defeat Ragnarok. 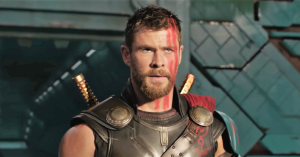 This comic book movie is yet another addition to the Marvel Cinematic Universe. This one was directed by Taika Waititi (What We Do in the Shadows), using a screenplay written by Eric Pearson, Craig Kyle (Logan), and Christopher Yost (Max Steel). The characters in the film originated in comic books created by Stan Lee, Larry Lieber, and Jack Kirby. The cast of this one includes Chris Hemsworth (12 Strong), Tom Hiddleston (Kong: Skull Island), Cate Blanchett (Cinderella), Idris Elba (Molly’s Game), Jeff Goldblum (Jurassic Park), and Tessa Thompson (Creed). 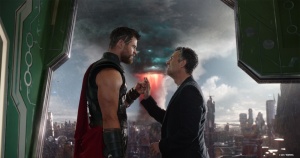 This story is based on some of the classic characters from the Marvel comic books created by Stan Lee, Larry Lieber, and Jack Kirby. The screenplay was written by Eric Pearson, Craig Kyle, and Christopher Yost. The writing is witty and fun right from the start. The comic elements in this movie are refreshing and well-written. The movie also adds some subtle tweaks to the characters that really help this one to work. The story has enough little twists and turns to be fun, and the action is solid. The movie also has a more serious side, with a good villain that cranks up the tension. This movie does get a little predictable at times, but that’s inherent to the genre and the understanding of the audience that there are other films in the pipeline. Otherwise, this is a solid story.

The cast seemed to be having fun with this one. The performances of the stars benefit from good writing and a clear chemistry between them. Chris Hemsworth is back in the role that he created, and he does a good job with the material. His connection with Tom Hiddleston i evident, and it helps this one a lot. Cate Blanchett brings on the intensity with her performance in the movie. Idris Elba and Tessa Thompson add solid performances of their own. Jeff Goldblum adds his own refreshing performance that gives this one a nice bit of color. Overall, the cast did a great job with this material.

This film falls in line with a lot of big-budget movies, lots of CGI. This is both good and bad this time around. While the CGI is nicely done, it seems to dominate the movie. One of the best aspects of the first Thor movie was the sense of reality and fantasy coming together. This lacks that feeling since it works in a world that is sometimes too artificial. This sounds like a big problem, but it’s not. This movie has a lot going for it, and the visuals are still fun and exciting. The movie moves at a great pace, and the music helps set the tone. This is one that fans of the Marvel films need to see. I would also suggest this one to fans of the stars. I give this one 4.3 out of 5 stars.