Based on the novel Wonder by R.J. Palacio

A young boy (Tremblay) with a medical condition that affects his appearance faces the challenging and sometimes cruel world of public school. He’ll need support from expected and unexpected places as he seeks out his place in the world. 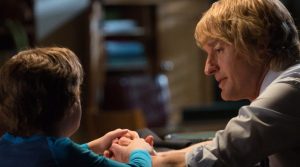 This movie is based on the 2012 novel of the same name, written by R.J. Palacio. The screenplay was written by Stephen Chbosky (The Perks of Being a Wallflower), Steve Conrad (The Secret Life of Walter Mitty), and Jack Thorne (A Long Way Down). Stephen Chbosky also directed the film. The cast includes Owen Wilson (Midnight in Paris), Julia Roberts (Flatliners), Jacob Tremblay (Room), Izabela Vidovic (Homefront), and Mandy Patinkin (Dick Tracy).

This heartwarming story was written by Stephen Chbosky, Steve Conrad, and Jack Thorne. The writing does a great job of taking the premise and avoiding the obvious melodrama within the story. Instead, this story follows the life of a young boy and his family as they all find their own way to deal with the challenges facing him. Being able to see the situation from multiple points of view is a refreshing change to the common storytelling used in movies like this. It also helps to connect you with all of the people affected. The story is whimsical at times, heartbreaking at others. If there is any weakness, it’s the somewhat safe feel of the story. The stakes aren’t really raised throughout the story. Overall, it’s a feel-good film with a lot of great story elements throughout.

The actors did a great job with this story. The young Jacob Tremblay leads the way with a thoughtful and fun performance. The emotions of his character are strong, and he seemed to handle each twist and turn wonderfully. He also connect well with Wilson, Roberts, and Vidovic. These connections are essential since the family bonds need to feel real. Julia Roberts portrayal of a worried and loving mother is solid as well. Owen Wilson also does good work in more serious role than he is often seen in. Izabela Vidovic and Mandy Patinkin are just a couple more people who brought great performances to the film. The cast all does good work, and even the children actors handle things nicely.

It’s obvious to see why this film earned an Oscar nomination for Best Makeup and Hairstyling. The work done in transforming Tremblay is wonderful. The movie also has solid camera work throughout the movie, as well as some fun visual effects. The film also has a very good score, composed by Marcelo Zarvos (Fences). Overall, this is a nicely made film with a feel-good vibe that never strays into the “made for TV movie” world. If you’re a fan of light drama this is one for you. I would also suggest this to fans of the stars. I give this one 4 out of 5 stars.