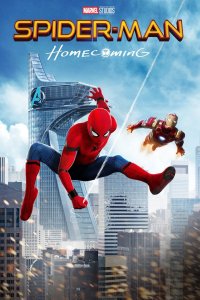 Based on comic books by Stan Lee, Steve Ditko

Peter Parker (Holland) is learning about the delicate balance of life as a high school student and life as Spider-man. When a new villain (Keaton) takes to the skies over New York, Peter is forced to shift that balance.

This comic book movie is yet another piece of the Marvel Cinematic Universe, based on comic books created by Stan Lee (Ant-Man) and Steve Ditko (Doctor Strange). The screenplay for this one was written by Jonathan Goldstein (Horrible Bosses), John Francis Daley (Vacation), Christopher Ford (Robot & Frank), Jon Watts, Chris McKenna (The LEGO Batman Movie), and Erik Sommers (Jumanji: Welcome to the Jungle). Jon Watts (Cop Car) directed the film. The cast of this one brings back some familiar faces from the Marvel universe, including Tom Holland (Captain America: Civil War), Robert Downey Jr. (Iron Man 3), Jon Favreau (The Wolf of Wall Street), Marisa Tomei (My Cousin Vinny), and Gwyneth Paltrow (Shakespeare in Love). The new faces include Michael Keaton (Spotlight), Zendaya (The Greatest Showman), and Donald Glover (The Martian).

This one was written by Jonathan Goldstein, John Francis Daley, Christopher Ford, Jon Watts, Chris McKenna, and Erik Sommers. It’s another solid addition to the constantly growing Marvel Cinematic Universe. The story focuses on the way that everyday life and secret heroism clash within the world of Peter Parker. The writing does a nice job introducing the new faces in the film. The more familiar faces are also brought into the film with some good early moments. The plot is strong, with some great twists late in the story. The writing also has some great dialogue that avoids being campy and includes a bit of humor that hits at all the right moments. This is a solid story that fits in with the tone of the other films in the Marvel series.

The actors did a very good job with the script they were given. Tom Holland handles his performance as the title character with great skill. It’s nice to see him hold his own opposite such big names as Robert Downey Jr., Marisa Tomei, and Michael Keaton. The chemistry between these actors really adds to the emotional drama within the story. Jon Favreau and Gwyneth Paltrow add nice work in smaller roles in this one as well. Newcomers Zendaya and Donald Glover also add nice performances to the mix. This is a great cast that delivers on a solid story.

This movie looks very good. The camera work and CGI visuals in the film do a great job creating the many intense action sequences for the heroes. In addition, the designs of some of the new characters in this one are great. This is a great addition to the Marvel Cinematic Universe, and fans of the other films need to see this one. I would also suggest this to fans of the stars. If you haven’t seen any other Marvel films this is one that viewers might still enjoy. The story is strong and this one has some great performances. I give this one 4.5 out of 5 stars.