Based on the novel The Asphalt Jungle by W.R. Burnett

The crooks behind a heist find themselves in the middle of a major manhunt after a streak of bad luck.

This film is a classic example of film noir, directed by the legendary John Huston (Heaven Knows, Mr. Allison). The film is based on the 1949 novel, The Asphalt Jungle, written by W.R. Burnett (The Great Escape). John Huston co-wrote the screenplay with Ben Maddow (The Savage Eye). The cast includes Sterling Hayden (The Godfather), Louis Calhern (Heaven Can Wait), Jean Hagen (Singin’ in the Rain), and Sam Jaffe (Ben-Hur). The film also features Marilyn Monroe (Some Like It Hot) in one of her earliest roles. The film would earn John Huston an Oscar nomination for Best Director, as well as a shared nomination with Ben Maddow for Best Writing, Screenplay. 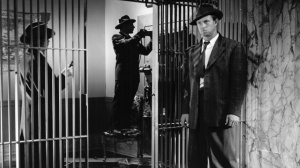 This is a solid example of classic American noir. The story weaves a unique plot with a variety of colorful characters. The story builds great scenes around the questions of innocence and trust. The heist itself is also intricate and unique for the era. The dialogue is written to give every character their own voice in the film. Rather than a movie filled with versions of the same crooks, this one gives them a lot of unique attributes. The twists and turns in this one are great as well. There is a grit and an honesty to this one that plays out through the consequences each character faces. This is a great story that holds up after almost 70 years.

Sterling Hayden lead off this cast with a great performance. Films like this don’t have heroes, and Hayden doesn’t try to become one. Instead, he creates a somewhat sympathetic villain that seems to straddle the line between good and evil. He’s joined Louis Calhern, another actor who knew how to play his role. Like Hayden, Calhern let the grit and the honesty of his character resonate. Jean Hagen and Sam Jaffe also do solid work with their roles. Jaffe earned an Oscar nomination for Best Supporting Actor for his work in this one. This is also a great example of the sultry delivery that would make Marilyn Monroe a star and an icon. Some of the lesser players performances feel a little campy, but their work doesn’t take much away from this one.

John Huston’s ability to frame a shot is on display throughout this one. The editing and cinematography come together to create a slow-burning visual drama. Harold Rosson earned a Best Cinematography nomination for his work. The movie also benefits from an excellent score, composed by the great Miklos Rozsa (Double Indemnity). I would definitely recommend this one to fans of film-noir. The story is a bit more gritty than many others from the era. I would also suggest this to fans of the stars and of John Huston. I give this one 4 out of 5 stars.