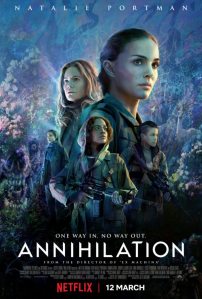 Based on the novel Annihilation by Jeff VanderMeer

A biologist (Portman) joins a dangerous expedition into a mysterious place where the laws of science no longer apply.

This story is based on the first book of a trilogy, but it doesn’t suffer from the expectations of a sequel. The screenplay does a good job setting up the story through a series of scenes that weave in and out of the present and the past. This one might best be described as a science-fiction fantasy film with a level of suspense that plays well throughout. The revelations about the characters are interesting, but also a bit on-the-nose at times. The twists in the story build around unique circumstances, keeping this one from being too predictable. The dialogue in the movie is good, but this also feels a bit too obvious at times. Like most films that cross the science-fiction and fantasy genres, this one has a number of plot holes. Luckily the story is interesting enough to remain engaging despite some of the flaws.

The best performances in this one come from Natalie Portman and Jennifer Jason Leigh. Each of them seemed to connect with the emotional content buried in the story. Portman’s character is complicated, and her work really allows that complexity to be revealed slowly. She also does a great job building the right chemistry with her co-stars. Jennifer Jason Leigh also had a complex character to work with. Her performance adds a lot to the tone of the story. Oscar Isaac also does solid work with a very unique role. Gina Rodriguez and Tessa Thompson were not quite as successful in their work. While the performances aren’t bad, neither of them gave their characters the depth they needed. Overall, the cast does good work with the unique script they were given.

This movie has some of the more stunning and unique visuals I’ve seen in a while. The CGI team created a world that feels beautiful, mysterious, and threatening all at once. The cinematography is also solid, pairing with the editing to maintain the suspense in the story. The audio work is also good, including a nicely composed score. Overall, the production work puts this one together nicely.

This one has a good story and solid performances from the stars. Fans of science-fiction or fantasy should check this one out. I would also suggest this one to fans of the stars. While the performances aren’t perfect, there is a lot to like. I give this one 3.8 out of 5 stars.

Click the image to check out the book the film is based on: