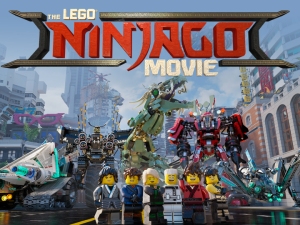 Lloyd (Franco) has been shunned by everyone around him for being the son of an evil villain (Theroux). He’s hoping to defeat his father with the help of his fellow ninjas.

This movie is another LEGO-inspired movie, falling in with The Lego Movie and The LEGO Batman Movie. This one was directed by Charlie Bean (Imp, Inc.), Paul Fisher (The Prince of Egypt), and Bob Logan (Astro Boy). The script was written by a group that includes John Whittington (When We First Met), Jared Stern (Wreck-It Ralph), Tom Wheeler (Puss in Boots), William Wheeler (The Hoax), Bob Logan, and Paul Fisher. The cast features some great actors like Jackie Chan (Kung Fu Panda), Dave Franco (The Disaster Artist), Fred Armisen (Zoolander 2), Michael Peña (Ant-Man), Kumail Nanjiani (The Big Sick), and Justin Theroux (The Girl on the Train).

This movie is the third Lego inspired film, coming behind the success of both The Lego Movie and The LEGO Batman Movie. This story is similar in tone to the other films, working like an action-comedy film. There is a lot of action and this one gets off to a great start. The jokes work on multiple levels, which is always nice since it broadens the appeal of the movie a ton.

This one also introduces some great characters that are really fun. The weakness of this story is the second half. While the early part of the film is exciting and fun, the second half suffers from slower pacing. That slowdown includes a shift in the comedy that just doesn’t work as well. The payoffs are still solid, but this one feels like two different films. Overall, this is a fun movie, but not at the level of the previous two LEGO films. 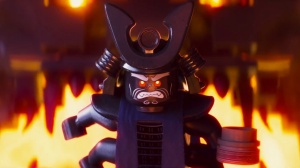 While the material has some issues, the cast does a great job with it. Jackie Chan is the real star of this one. His performance is perfect for the film, and provides some of the best moments in the story. Justin Theroux does an equally good job playing the villain of this one. Both of these actors do great work with the comedy throughout the film. Dave Franco does a really good job with the central role in this one. Michael Peña, Kumail Nanjiani, and Fred Armisen are just a handful of the stars who round out the cast. Overall, this one has some great voice acting from the entire cast.

This movie has some incredible visuals thanks to a skilled group of animators. The action is solid and the visuals also add to the comedy of the story. There isn’t anything to complain about from the production work in this one. Fans of the previous LEGO movies should make sure to check this one out. I would also suggest this one to fans of the stars. while the story isn’t perfect, this is a great choice for a family movie night. I give this one 3.5 out of 5 stars.