When a murder occurs in their small town, a young Albanian boy and his sister become the target of a blood feud.

This 2011 film features a talented cast of Albanian actors including Tristan Hililaj (Bota), Sindi Lacej, Refet Abazi (Odmazda), Luan Jaha (Three Windows and a Hanging), and Zana Hasaj. The movie was directed by Joshua Marston (Maria Full of Grace), using a script that he co-wrote with Andamion Murataj (Contromano).

This is a powerful story that dives deep into the Albanian culture and the blood feuds that still occur today. The writing does a great job providing insight into the daily lives of the characters, helping to set the stage for the story. The characters are rich and complex, and their interactions feel genuine. The dialogue is good, never saying too much. This one also does a good job reminding the audience of the effects of the events on the children involved. This movie is a slow burn that pushes the tension to the maximum. It’s gritty without being graphic, and creates a sense of authenticity that helps the movie to pay off in the end.

The cast of this film does a really good job with the material. Tristan Hililaj does a wonderful job with the central role of the story. The writing asked for him to grow a lot throughout the story and he seemed to make all the right adjustments. His ability to play a wide range of emotions really helps the story. He also has really great chemistry with his co-stars, including Sindi Lacej. Lacej also did a nice job making the right adjustments to her performance. The rest of the cast also does great work. Jaha, Abazi, and Hasaj all add nice performances to the mix. Their ability to convey the tension and emotion of the story really wins out in the end. 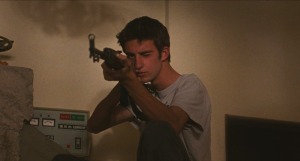 This movie captures the natural beauty of the Albanian countryside and juxtaposes it with the harsh world of the story. The camera work is simple and straightforward, allowing the emotions to soak in. The tone is helped with music by Leonardo Heiblum (Frida) and Jacobo Lieberman (The Man Who Saw Too Much). This is a slow burn, designed to let the audience live in confinement with the characters. The story is strong, but also very sad at times. I would definitely recommend this one to fans of foreign cinema. I would also suggest this one to anyone who loves great drama. I give this one 4.5 out of 5 stars.