Based on the novel The Black Stallion by Walter Farley

A young boy (Reno) bonds with a mysterious Arabian stallion after they both survive a shipwreck.

Walter Farley’s novel The Black Stallion was first published in 1941. Thirty-nine years later the story was adapted by Melissa Mathison (E.T. the Extra-Terrestrial), Jeanne Rosenberg (The Journey of Natty Gann), and William D. Wittliff (Legends of the Fall). The film was directed by Carroll Ballard (Fly Away Home), and stars Kelly Reno (Brady’s Escape), Mickey Rooney (Breakfast at Tiffany’s), Clarence Muse (Shadow of a Doubt), and Teri Garr (Tootsie).

This is a classic story that was nicely adapted for the big screen. The strength of the story comes from the themes of love and childlike wonder. There are a number of great early moments that set up the rest of the film nicely. There are also some great moments that highlight the relationships between some of the central characters. The rest of the film has some good twists, but does suffer from a somewhat episodic feel. This leaves some of the early parts of the movie feeling unbalanced. The dialogue for this one is solid, but sometimes feels a bit too obvious. There are also a couple of characters that feel very incomplete. This isn’t a perfect story, but it’s a nice family film that has a lot to offer. 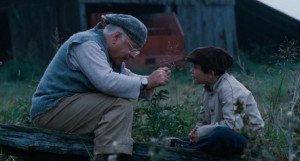 The real stars of the film are Kelly Reno and Mickey Rooney. Kelly Reno does a nice job not over-playing the emotion in his part. Rooney was the perfect choice for a semi-father figure. Their relationship is really wonderfully built thanks to the great chemistry they share. They also do great work with the stallion in the movie. The rest of the cast all do solid work, but there is something incomplete in the writing that doesn’t give them a lot to work with. Teri Garr and Clarence Muse are just a few other standouts in this one. Mickey Rooney earned an Oscar nomination for Best Supporting Actor for his work in this one. Overall, the cast does good work with the story.

This movie is beautifully shot, thanks in large part to cinematographer Caleb Deschanel (Jack Reacher). The film earned an Oscar nomination for Best Film Editing, and a special Oscar was awarded to Alan Splet (Days of Heaven) for Sound Editing. This film uses beautiful locations and nicely designed sets to tell a wonderful story. The movie also benefits from a nice score, composed by Carmine Coppola (The Outsiders). While there are some issues, this is a family film that holds up nicely after almost 40 years. If you’re a fan of Rooney this is one to check out. I would also suggest this one to fans of the novel. I give this one 4 out of 5 stars.

If you’d like to see this one, check out the Criterion Collection release by clicking the poster below. It’s a wonderful print.