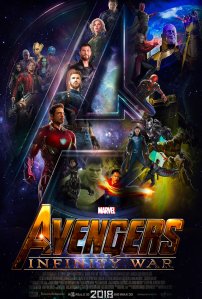 The Avengers and their allies have come together in an attempt to save the universe from Thanos (Brolin). His plans for destruction across the universe soon put everyone and everything the Avengers have worked for at risk. 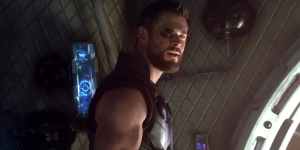 This is officially the 19th film in the Marvel Cinematic Universe that started with 2008’s Iron Man. The credit for the many characters in the film can be given to a number of comic book legends, including Stan Lee, Larry Lieber, and Jack Kirby. The screenplay was written by Christopher Markus (Captain America: Civil War) and Stephen McFeely (Thor: The Dark World), both of whom have worked on several of the previous Marvel films. Marvel veterans Anthony Russo (Captain America: The Winter Soldier) and Joe Russo (Captain America: Civil War) teamed up to direct this one.

The cast of this movie brings together a number of the stars of the previous Marvel films. (Although there are a number of bigger characters not featured.) Some of the stars include Robert Downey Jr. (Sherlock Holmes), Chris Evans (Gifted), Mark Ruffalo (Spotlight), Scarlett Johansson (Isle of Dogs), Benedict Cumberbatch (The Imitation Game), Tom Holland (The Impossible), and Chadwick Boseman (42). The cast also features Chris Pratt (Jurassic World), Zoe Saldana (Star Trek), Paul Bettany (A Beautiful Mind), Tom Hiddleston (Crimson Peak), Elizabeth Olsen (Wind River), and Josh Brolin (No Country for Old Men).

The task of bringing so many characters together wasn’t a small one. Not only are there a number of characters involved, but also the history of the previous 18 films. Screenwriters Christopher Markus and Stephen McFeely did a good job rising to the challenge. The story finds a good starting point and slowly expands from there. The action is spread out nicely in this one, and every sequence is really good. The film also avoids any prolonged exposition that might have hurt the pace of this one. The character interactions fit into the way the previous films were written, and the dialogue is also consistent.

The Marvel films have reached a point where the stakes had to be higher in this movie. The writing boldly raised the stakes at all the right moments. This adds an excellent level of tension to the film, and takes away much of the predictability that some of the other films have had. With another film on the horizon, there are some unanswered questions. Much like other film series, this one will leave audiences asking for more. It’s worth mentioning again that the writing does a great job of bringing all of the different stories together without any “what?!” moments. This is a solid film and a great addition to the universe. It’s also the most emotionally driven story within the series.

This one features great performances by the entire cast. Rather than isolate individuals, I’d prefer to focus on the collective work of the huge cast. The performances are solid and really adjust nicely to the tone of this story. This movie also brings together a number of stars who had not previously interacted within the Marvel world. All of these actors do a nice job coming together and creating chemistry. The cast does good work with the action scenes as well. There isn’t much to criticize when it comes to the acting. The script gave them a lot to work with and they pulled it off nicely.

This movie looks pretty good. From camera work to CGI, this one doesn’t seem to leave any glaring issues out there. Cinematographer Trent Opaloch (District 9) did a great job creating a consistent visual tone that carries throughout the movie and fits in with the other movies. He also did a nice job with the many intense action sequences. The movie also has great sets and costuming that help keep the world of the film interesting and unique. The CGI is solid, and definitely an improvement from the weaker work on Black Panther. The music of Alan Silvestri (Forrest Gump) adds something special to this one.

This is a nice beginning to the end of an intricate arc built throughout a number of previous films. The writing does a good job making this feel more like a complete story than it might have. Given the nature of the story, there will likely be some people who are disappointed with the outcome. But that’s common when it comes to unresolved stories like this one. The actors all bought into the emotion of the story, and that makes a huge difference as well. The production work is also solid, leaving little to complain about.

If you’re a fan of the stars this should be a no-brainer. This might not be a good place to start if you’re unfamiliar with the previous movies. While this isn’t a perfect movie, there’s a lot to like. I give this one 4.5 out of 5 stars.

If you’re looking to catch up, just click on the posters of some of the recent films in the series below.