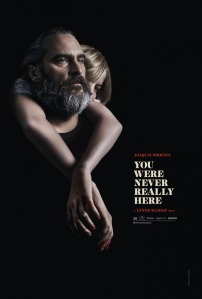 Written and directed by Lynne Ramsay

Joe (Phoenix) is a man with without fear who tracks down missing girls for a living. When his latest job goes sideways, Joe comes face to face with a dangerous conspiracy.

This film is based on the book of the same name, written by Jonathan Ames (The Extra Man). Lynne Ramsay (We Need to Talk About Kevin) both wrote the screenplay and directed this one. The movie stars Oscar nominee Joaquin Phoenix (Gladiator). The cast also features Judith Roberts (Eraserhead), Ekaterina Samsonov (The Ticket), and Alex Manette (Shame).

This is the kind of film that explores concepts almost as much as it tells a story. The writing does a great job of immediately setting the tone. Some of the opening moments are really fascinating. There is nothing held back as this one digs deep into the psychological torment and physical violence that surrounds the central character. The dialogue is limited in amount, but every word seems to matter. Much of the film relies on the audiences ability to process the intense violence and the experiences of the characters. This story is not a simple crime drama, there’s a lot going on that needs to been seen to be understood. This one doesn’t hand out the answers throughout the movie, instead it asks questions. Perhaps the only issue with this one is the possibility that it might not work for a wider audience. This is a nicely written film that is designed to make the audience think.

The acting in this one is really good. For his part, Joaquin Phoenix is excellent. His role is central to the story, and he creates a character that is emotionally fragile, disconnected at times, and intensely violent. His performance captures all of the intricate pieces of a very complicated character. Phoenix also found the right way to establish the complicated relationships his character has with the other characters in the story. This kind of precision earned him the Best Actor award at the Cannes Film Festival. Judith Roberts, Ekaterina Samsonov, and Alex Manette all do good work in some of the bigger roles in this one. Overall, the cast seemed to understand the themes of the story, and their roles reflect it.

This one looks incredible. It would be criminal not to mention the great work done by cinematographer Thomas Townend (Attack the Block). His camera work and the use of light add something great to this. The visuals often reminded me of Drive and Only God Forgives. The camera work also found the right ways to portray the intense violence in the film. The use of color also adds a great visual layer to the film. The editing in this one is also nicely done. The running time is short, but all the pieces are in place. The film also features an excellent score, composed by Jonny Greenwood (Phantom Thread). The music plays a role in developing the tension and the suspense of the film. This one is nicely produced and a lot of credit should be given to Lynne Ramsay for her work as director. She pulled together a lot of elements to create a unique and powerful movie. She was awarded the prize for Best Director at the Cannes Film Festival.

This is an intense film that might not work for everyone. The graphic violence and the intense themes are a lot to take in. If you’re still on board with the previous warning, prepare yourself for a powerful and intense movie experience. Fans of Joaquin Phoenix should check out his masterful performance in this one. Like similar films, this one took some time to process. There are more questions than answers, but it works wonderfully. I give this one 5 out of 5 stars.

If you didn’t catch this one in the theater, you can click on the poster below for a chance to see it.