Written and directed by Michael Cimino

A well-born Sheriff (Kristofferson) attempts to protect a community of immigrants from a dangerous syndicate of cattle barons.

This movie might be one of the most debated Westerns ever made. From financial issues to production complaints, this has often been regarded as a cursed production. This film was written and directed by Oscar winner Michael Cimino (The Deer Hunter). The stars of the film include Kris Kristofferson (Payback), Christopher Walken (At Close Range), and Isabelle Hupert (Elle). The cast also includes John Hurt (The Elephant Man), Richard Masur (Risky Business), Sam Waterston (Hannah and Her Sisters), and Jeff Bridges (The Big Lebowski).

This story is very loosely based on the Johnson County War in Wyoming in the late 19th century. Michael Cimino wrote an ambitious script, seeking to push the limits of the genre. The resulting story is a sprawling western epic that tells a fascinating story. The script is at its best when it explores the relationships between the central characters. Those moments build something honest within the story, and the dialogue feels honest and natural. 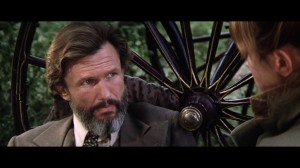 The movie also features great moments where the idea of expansion into the West is explored. There are a number of nice action sequences throughout the movie also. Unfortunately, this movie spends a significant amount of time building the world. Much of the film is built around exploring both the large spaces and the tiny details of the story. This might have been okay, but much of it feels irrelevant to the story as a whole. This also brings attention to a number of story issues that could’ve been overlooked if there wasn’t so much time given to them. This is not a badly written film as much as it might be a badly edited script. The idea of “killing your darlings” seems to have been discarded.

The actors did a really great job with this script. It should be noted that the production was overrun by delays and Cimino’s constant search for perfection. It’s been noted that most of the scenes were re-shot as many as fifty times. Despite these issues, the performances that were captured are solid. Kris Kristofferson does a great job taking the lead in the film. He handles all of the emotional aspects of his character nicely, and creates some great chemistry with the other stars. Christopher Walken also does a great job in this one. His performance makes the best of his natural intensity. 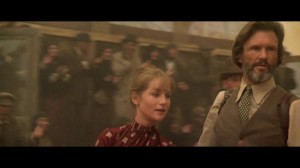 Isabelle Huppert was given a tough task in this one. Her role is awkwardly written and feels incomplete at times. Despite that, she did bring out some nice moments in the film. The movie has a number of great performances from the huge cast. Some of the people who stand out in this one are Sam Waterston, John Hurt, Richard Masur, and Jeff Bridges. It’s simply incredible that the cast was able to bring their energy to a project like this, with a shooting schedule that lasted eleven months. It’s evident that this was an intense experience for them since the chemistry feels so real. 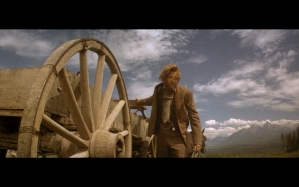 All other issues aside, this one just looks great. One of the best aspects of this movie is the cinematography. Vilmos Zsigmond (The Rose) did incredible work making this one look great. The locations and sets were nicely chosen, and the camera made great use of them all. The action sequences are all large in scale and impact. The film earned a single Oscar nomination for Best Art Direction – Set Decoration. The movie also features an incredible score, composed by David Mansfield (The Apostle). Like the visuals, the music seems to make all the right choices.

This movie was plagued by delays due to the way Michael Cimino ran the production. In addition to copious retakes, there were a number of other issues that slowed things down. There were set being re-builds and unreasonable demands on the stunt and special effects teams. After his initial edit, he showed the studio heads a film that ran five hours and twenty-five minutes. When they refused to even consider releasing it, Cimino pared it down to three hours and thirty-nine minutes. This version of the film was released on November 19th of 1980. The critics slammed the movie, and viewers were few. Only in recent years has it been re-examined and even appreciated by a new generation of critics and viewers.

I think this film is a great example of vision needing restraint. The story is fascinating, but the script is far too broad. The editing should’ve been done with a heavier hand since there is a good story buried in this one. Fans of westerns should make sure to see this one. While some people have suggested that this led to the demise of the western genre, I think that’s an over-simplification. There’s a lot within this one that needs to be seen. I would also suggest this to fans of the stars. There are great performances scattered throughout the movie. I can’t guarantee that you’ll love this one, or even like it, but it’s a fascinating movie. I give this one 3.6 out of 5 stars.

This movie was released with the 219 minute version by Criterion. Click the poster below for more info.