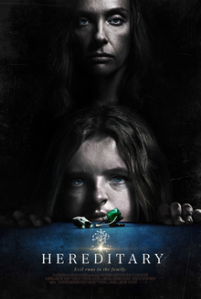 Written and directed by Ari Aster

A death in the family leads to series of tragic and horrifying events that uncover dark family secrets.

This film was written and directed by Ari Aster. The cast includes Toni Collette (About A Boy), Alex Wolff (Jumanji: Welcome to the Jungle), Milly Shapiro, Gabriel Byrne (Miller’s Crossing). This was the first feature-length script Aster has written, as well as his first time directing a feature film.

This is a psychological horror film in the vein of Rosemary’s Baby. Ari Aster crafted a story that takes a different approach to a familiar genre. The setup creates immediate tension, using the perfect setting and a unique blend of characters. Throughout the movie the twists and turns are intense. The story also makes great use of sound and dialogue to add to the tension. 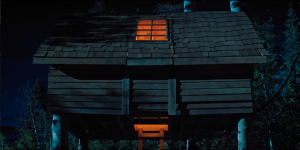 This one is written to keep you from getting comfortable, with dramatic shifts happening when you least expect them. Instead of getting cheap shock with gore and camera tricks, this one lets you inside the minds of the terrified characters. This allows the true psychological terror of the story to sink in. This does keep the pace of the film moving a little slower, but it’s a slow burn that’s worth the wait. The payoffs in the film are nicely handled, and allow the story to shift gears at the right moment. Horror fans should find this one both entertaining and refreshing from a story standpoint.

The actors certainly had their hands full with this one. The success or failure of this movie depended on their ability to handle the emotional aspects of the script. Toni Collette certainly did her part in this one. She leads the way with a tortured and horrifying performance that shows a woman pushed to the edge. Her role also called for a powerful physical presence, which she also nailed. 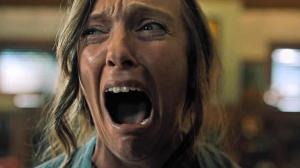 Alex Wolff also pulled off his role nicely. Like Collette, he plays a character who experiences horrifying changes throughout the movie. His physical performance is wonderful, and he delivers powerful emotion as well. Milly Shapiro might be new to audiences, but she plays her role like a professional. She gives her character a unique voice that really pays off. Gabriel Byrne also does great work in this one. These four actors all do a nice job creating the chemistry the story needed. 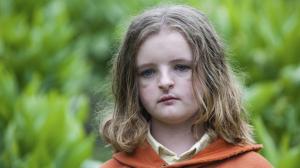 Hereditary is a unique film in many ways, including visually. This one uses dynamic camera work to create a visual tension that the story really benefits from. This doesn’t mean that this is full of camera tricks or campy setups. The visuals are just twisted enough to keep things feeling uncomfortable. The film also makes great use of the locations, sets, and makeup nicely. While this isn’t a gore-fest; there are a handful of really gritty scenes. The sound work also helps to push this one forward. Some of the audio decisions pay off by ramping up the suspense and horror. Colin Stetson’s (Blue Caprice) score also adds to the tone of the movie. Overall, the production work on this film is really great.

In some ways, this story might have worked purely as a dark family drama. Adding in the horror elements just pushes the stakes much higher, making this a memorable movie experience. Like most psychological horror, there will always be debates about the end of the film. Thankfully, this one leaves a lot of room for questions throughout the story, and doesn’t try too hard to answer them all. The pure terror in the performances couples nicely with the twists and turns of the story. Fans of horror should make sure to see this one. I would also suggest this to fans of the stars. Their performances feel genuine and powerful. Make no mistake, this is a very scary movie. I give this one 4.7 out of 5 stars.