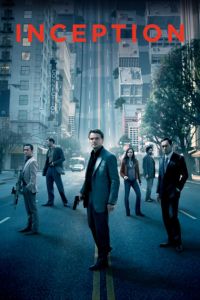 Written and directed by Christopher Nolan

A talented thief (DiCaprio) has used unique dream-sharing technology to steal corporate secrets from the minds of his victims. When a chance at a new life presents itself, he attempts to push the technology to new heights in an effort to plant an idea into the mind of a CEO.

This film was written and directed by Christopher Nolan (Dunkirk), earning eight Oscar nominations including Best Picture. The script was a longtime project for Nolan, who spent more than a decade working on it. This film features an all-star cast that includes Leonardo DiCaprio (The Revenant), Joseph Gordon-Levitt (50/50), Ellen Page (Juno), and Tom Hardy (Mad Max: Fury Road). The stars also include Ken Watanabe (Batman Begins), Cillian Murphy (In the Heart of the Sea), and Marion Cotillard (Public Enemies).

This film features one of the most unusual and intelligent premises to be found in a blockbuster movie. The story works as a heist film, a science-fiction thriller, an action movie, and a deep drama. The elements of the multiple genres blend together nicely throughout the entire film. This one starts off quickly, with a series of scenes that introduce the premise and the central characters in the film. These characters are a unique bunch of misfits that all feel natural within the story. The dialogue in the script is smart, and the exposition is well-hidden but effective.

Throughout the movie there are also some excellently scripted action sequences that help keep the pace of the film from slowing too much. There is a sense of mystery that helps to keep the story from being predictable. Part of this is the mystery that clouds the motivations of the characters. Despite the complex nature of the premise, the writing doesn’t get bogged down with the details. The concept of reality is visited and revisited throughout this one, creating a unique tone that is incredibly effective. It’s tough to describe a script with this much going on. Chirstopher Nolan would eventually earn an Oscar nomination for Best Original Screenplay. In the end it all blends together into a cohesive and wonderful story.

The cast of this film features many big names. Leonardo DiCaprio takes the lead with another great performance. His character is an emotionally complicated man with a lot of secrets. Throughout the movie he creates excellent chemistry with his co-stars. Joseph Gordon-Levitt adds his own excellent work to this one. His performance plays like a much-needed voice of reason throughout much of the movie. Ellen Page also does a nice job with her role. She manages to connect well with her co-stars throughout some really intense moments.

Tom Hardy also brings something special to the film with an intense performance. He also finds time to bring out something witty within his role. With this many big names, the list of great performances could go on for ages. Ken Watanabe, Marion Cotillard, and Cillian Murphy are just a few of the talented people who help to bring this story to life. The entire cast does a great job with the intense physical demands of the story. There is also a sense of chemistry throughout the movie that helps to keep the performances feeling authentic. The writing gave these stars a lot to work with, and they elevated the material with their great work.

In regards to the visuals of this film, Christopher Nolan said, “as soon as you’re talking about dreams, the potential of the human mind is infinite. And so the scale of the film has to feel infinite. It has to feel like you could go anywhere by the end of the film. And it has to work on a massive scale.” This movie succeeds in creating that massive scale thanks to the work done by cinematographer Wally Pfister (The Dark Knight Rises) and the visual effects team. Throughout the movie the concept of reality is examined not only through the performances of the actors, but also the mind-bending visuals. Pfister would win an Oscar for Best Cinematography for his efforts. The film would go on to earn a nomination for Best Art Direction, and a win for Best Visual Effects.

The sound work in this film is also wonderful. The use of sound is important to the story as well as the overall tone of the film. The film earned Oscar wins for Best Sound Mixing and Best Sound Editing. Hans Zimmer (The Holiday) would also earn an Academy Award nomination for Best Original Score. His music helps to highlight the emotional tones within the story. Overall, the sound and visual production work really elevates this film to a great level. After eight years this one still holds up nicely.

If you haven’t seen this one, you need to check it out. The film works within a number of genres that make it hard to classify. Perhaps it’s best describes as a science-fiction heist thriller. I would also make sure to see this if you’re a fan of any of the stars. If you watched this one in theaters it’s time to revisit it. This is an intense movie experience that pushes the envelope in the way it addresses the deeper meanings of the story. I give this one 5 out of 5 stars.