A father (Offerman) and daughter (Clemons) connect over music as she prepares to move away for college. Along the way, each of them learns about themselves and the life they’ve shared. 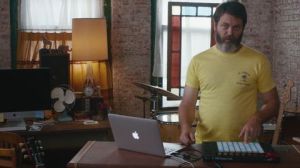 This film premiered in January at the Sundance Film Festival before a wider release in June of 2018. The script was written by Brett Haley (The Hero) and Marc Basch (I’ll See You In My Dreams), with Haley also serving as the director. The cast features Nick Offerman (22 Jump Street), Kiersey Clemons (Dope), Ted Danson (The Onion Field), and Toni Collette (Hereditary). 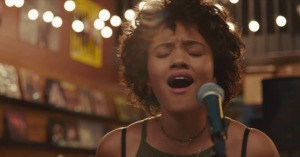 This script takes a straightforward approach in examining the relationships between Frank Fisher (Offerman) and the people around him. This isn’t a unique story until you add in the influence that music has on Frank. The writing does a very good job of introducing the audience to a small group of characters who are just living their lives. The relationships between each of the characters are honest and realistically complicated. The complications are where the twists come from, and they help to raise the stakes of the film. This film pays off nicely and doesn’t attempt to push any messages or deeper meanings. The dialogue is playful and oftentimes feels almost improvised. There’s an honesty to the dialogue that helps the story feel genuine as well. This one might be a bit predictable, but that’s easily overcome thanks to the charm within the writing. This is a charming story with just a touch of drama, and it works nicely.

The small but talented cast did a nice job with this one. Nick Offerman gives a performance that’s both touching and witty. He builds great chemistry with all of his co-stars, making for some great moments throughout the film. He also makes the most of the musical moments in the film. Kiersey Clemons does a great job playing opposite Offerman in this one. Her musical talent helps to give this one something special. She also does a good job not overplaying a role that could’ve easily become way too melodramatic. Ted Danson adds a great comedic element to this one. (It’s fun to see him playing a bartender again.) Toni Collette also does good work with her part in this one. (After Hereditary, it’s nice to see her with a smile on her face.) Overall, the cast does great work making this one charming and fun.

This film lives within a small and unique world. The production work doesn’t attempt to do anything unique. Instead, the work plays within the tone of the story and makes things look and sound like they should. The original music, written by Keegan Dewitt (Listen Up Phillip) is incredibly well written. He not only composed the songs, but also wrote the necessary lyrics. Overall, this is an independent production that looks and sounds good.

This is a fun movie that won’t take home awards, but will win over the audiences. Fans of the stars should make sure to check this one out. I would also suggest this one to fans of music. I give this one 3.8 out of 5 stars.