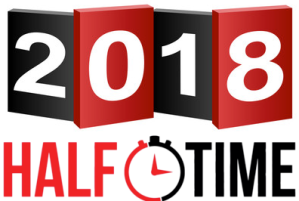 My Favorite Films of 2018 – Halftime Edition

This films of 2018 have been an interesting mix of successes, failures, and everything in between. Some films have come out of nowhere and surprised everyone. (Think A Quiet Place.) While others were analyzed and talked about for far too long, only to disappoint many viewers. (How about Solo: A Star Wars Story.) At just a few weeks past the middle of this calendar year I’m going to lay out the best and the worst of what I’ve seen. I have currently seen 20 of the films released between January 1, 2018 and today.

It’s probably best to start with the top ten. My initial ratings are a part of the decision-making process, but I’m also looking back to see what really stuck and what was a little more forgettable. The competition was tight with so many good films released this year. You can click on the movie titles to see the full original reviews.

This film looked fun from the moment the trailer was released. It also looked like a predictable romp with a nice collection of stars. This movie was exactly what I expected it to be. It’s funny and irreverent, but not as predictable as I expected. Sometimes it’s nice to get exactly what you want from a film. This one made me laugh and didn’t push too hard to be “edgy”.

This is another example of a film that gives the audience what they want. When I saw that Bruce Willis was going to be a part of a new generation of Death Wish I was hoping for a decent story and some serious action. This one provided both. While it’s not a perfect film, it definitely breathes new life into an old franchise. Eli Roth also added his own brand of violence to the film, creating some surprises throughout.

This is the kind of movie that keeps me coming back to the Marvel Cinematic Universe. This is another funny and action-packed installment, and a nice followup to the 2015 film. Paul Rudd leads the cast with a performance that further proves that he was meant for this role. (Or maybe it was the other way around.) The action is there. The story is solid. The laughs are many. After Avengers: Infinity War it was nice to leave a Marvel movie with a smile on my face again.

I can’t really believe that two horror films have made the top-ten list this time around. It’s not a genre I’m generally a fan of, but this film found a deserving place on the list. This one is all about the tension and mystery in the story. There are some seriously disturbing visuals in the movie, but it’s the fear of the unknown that made it work. This one lives in the world of Rosemary’s Baby, one of my favorite horror films. If you’re looking for a good disturbing horror film, this is one to check out.

If you grew up with Mister Roger’s Neighborhood this is the documentary you probably didn’t know you needed to see. This is a fantastic look at one of the true good guys in the world of television. The interviews with family, friends, and co-workers shine a light on a somewhat mysterious man who spent his life reaching out to children. His story is wonderful, and it’s told through great footage and interviews. Even people who don’t like documentaries might want to check this one out.

This movie might have the Marvel tag, but it’s in a world of its own. Ryan Reynolds leads the way in a hilarious sequel to 2016’s Deadpool. I think this is a better film than the original, but I’m not sure that many fans will agree. This one has a more complete story and still manages to get all of the uncomfortable bathroom humor in there. There are a lot of new faces, and the film doesn’t rely on old gags to get a laugh. It’s an irreverent movie that doesn’t hold back in going places it probably shouldn’t.

This was probably the most anticipated film of early 2018. With the setups from the previous installments, audiences were ready for something big. They got what they expected, and a lot more. (Seriously, it took a lot of people by surprise.) This one makes good use of the all-star cast and the dozens of characters in the Marvel Cinematic Universe. It’s also nice to see this one significantly raise the stakes. The story does leave a lot left to be answered, but it’s a solid dramatic addition to the MCU.

3. You Were Never Really Here

This movie was another one that caught me by surprise in all the right ways. Joaquin Phoenix does almost all the heavy lifting in one of the most visceral and gritty movies I’ve seen in a long time. (Drive might be the last one that hit me this hard.) The acting is incredible from Phoenix and the rest of the cast. The cinematography is great, making use of some great sets and locations. The violence is well-choreographed but realistic, and in your face at all times. The story is full of tough material, but also has a level of tension that really plays well. While this might not appeal to wider audiences, it has a lot to offer.

This one was the most surprisingly good films I’ve seen this year. (I’ll be honest; I didn’t think that Jim from The Office had it in him.) This is a tightly wound film with all of the suspense and terror that you could wish for. Instead of a typical monster movie, this lives in the fear of the unseen terror. The cinematography creates a semi-claustrophobic feel at times, really adding to the tension. The acting is top-notch, and the story is great. I can see this one being brought up around award season.

This movie further proves that Wes Anderson knows exactly what he’s doing. This one tells a fantastic story in the distant future, but anchors itself in emotions that are easily relatable. The characters are wonderfully created, both through the visuals and the dialogue. The end result is a movie with a lot more emotional pull than I expected. This is a heartwarming story told through dazzling stop-motion animation. I think it’s a movie that people need to see.

So what was the worst movie I’ve seen in 2018 so far? That’s an equally difficult question, with many films falling far short of their potential. Here are the three worst movies I’ve seen this year. (There is no order to the bottom three.)