Based on the book All the President’s Men by Bob Woodward, Carl Bernstein

Carl Bernstein (Hoffman) and Bob Woodward (Redford), reporters for “The Washington Post”, uncover the details behind the Watergate scandal. Their reporting leads to historic repercussions throughout the United States government. 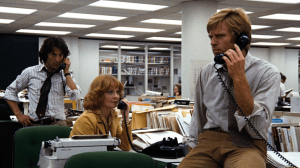 This film is based on the true story of Bob Woodward (Wired) and Carl Bernstein’s efforts to expose the truth behind the Watergate scandal. They documented their story in the book All the President’s Men. That book was adapted by William Goldman (A Bridge Too Far) for this film. Oscar nominee Alan J. Pakula (The Devil’s Own) directed the movie. His work earned him a nomination for Best Director. The cast of this film features a great collection of talented people. Dustin Hoffman (Straw Dogs) and Robert Redford (The Sting) lead the way, portraying Bernstein and Woodward. The cast also features Jack Warden (While You Were Sleeping), Jason Robards (Once Upon a Time in the West), Hal Holbrook (Lincoln), Jane Alexander (Kramer vs. Kramer), Martin Balsam (Breakfast at Tiffany’s), and Ned Beatty (Network). This film would eventually earn eight Oscar nominations, including one for Best Picture.

William Goldman took Woodward and Bernstein’s book, All the President’s Men, and turned it into a wonderful script. The story gets off at a good pace that helps the tension stay high. Goldman also did a great job of finding the right moments to focus on in the script. The writing builds a unique type of suspense that grows throughout the film and really pays off. 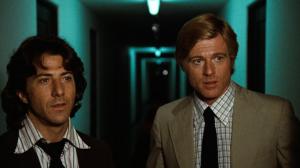 This is partly due to the constantly rising stakes that the main characters face. Each of the characters is nicely written, giving the film a level of authenticity that a true story really needs. The stars were also given some great dialogue to work with. This is a great script with enough twists and turns to keep the audience engaged. William Goldman won an Academy Award for Best Adapted Screenplay for his work. After more than 40 years, this is still one of the best films of its kind.

Dustin Hoffman and Robert Redford lead the way, playing the central figures in the film. Their performances are very different, but there is a chemistry between them that the movie needs. The rest of the cast all add great performances to this one as well. Jason Robards does great work with his role in this one. He went on to win a Best Supporting Actor Oscar for his performance. Another one of the standout performances in this movie came from Jane Alexander. 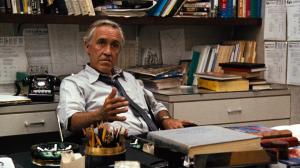 She earned a nomination for Best Supporting Actress for her work. Jack Warden also does a great job with his role. Hal Holbrook, Martin Balsam, and Ned Beatty all add nice performances of their own. The rest of the cast also do great work with their roles in the film. The casting work for this film brought together a fantastic list of veteran actors. In addition, the actors playing some of the smaller roles are also very good. There aren’t any issues with the acting in this one. The cast brings this story to life and really elevates the material.

I love the way this movie was shot. Cinematographer Gordon Willis (The Godfather: Part II) added some dynamic shots that help to maintain the visual tension the film needs. The movie got addition help with the editing done by Robert L. Wolfe (The Rose). Wolfe would earn a nomination for Best Film Editing for his efforts. The movie also has a wonderful score, composed by David Shire (The Conversation). The sound and visuals really add something special to this one. The movie earned Oscar wins for Best Art Direction and Best Sound.

This is a marvelous movie that holds up wonderfully. The story is compelling and the actors nailed their work. If you’re a fan of suspense, drama, or political thrillers; this is one you should make sure to see. I would also suggest this to fans of any of the stars. I give this one 5 out of 5 stars.