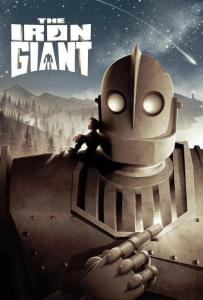 Based on the novel The Iron Man by Ted Hughes

When a mysterious giant robot (Diesel) lands in a small town he’s quickly befriended by a young boy (Marienthal). Soon an ambitious federal agent (McDonald) rolls into town looking to destroy a robot that he sees as a threat.

This animated feature film is loosely based on the 1968 novel The Iron Man, written by Ted Hughes (The Rain Horse). The script was written by Tim McCanlies (Secondhand Lions), Brent Forrester (The Stupids), and Brad Bird. Bird (Ratatouille) also directed the film. The voice acting in this film is done by a talented group of actors. Some of the stars include Eli Marienthal (American Pie), Jennifer Aniston (Horrible Bosses), Harry Connick Jr. (Basic), and Christopher McDonald (Thelma and Louise). John Mahoney (Dan in Real Life), Vin Diesel (Guardians of the Galaxy), and Cloris Leachman (The Last Picture Show) also lend their voices to this one.

As far as stories go, this is a wonderfully whimsical tale. While the premise might be used often, the little twists really make this one unique. Part of the success of the writing is the way that the characters were crafted. Every character has a unique voice and a lot of interesting traits. The dialogue is witty and quick, and brings out a lot of humor in the story. The script also finds the emotional undercurrent in the story and plays it nicely. The only issue with this one is how predictable it is. This is not a major issue thanks to writing that can really suck you in. Still, there were only a couple possible ways to end the film, so there isn’t much of a surprise. Overall, this is a story with comedy and heart that really works.

The actors must have had fun with this script. There are so many fun moments that really push the emotion and the laughs. Eli Marienthal leads the way with a very good performance. He has solid moments with all of his co-stars, and really brings out the childlike wonder of his character. Jennifer Aniston, Harry Connick Jr., and Christophr McDonald all nail their roles in this one as well. Their performances come together to make this one special. Cloris Leachman and John Mahoney also add nice performances to the film. This one also features Vin Diesel, playing a character with little to say. (I think this was his preparation to play Groot.) The entire cast does good work giving this one life and making the story into something unique and fun.

The animation work done for this film is quite unique. The visuals were created using a mix of computer and hand drawn images. The movie was also created in a widescreen format, fitting in with Bird’s vision for the story. The result is a movie with a very unique look that holds up almost 20 years later. The audio and score are also solid additions to the overall feel of this one.

This film was a box office disappointment when it was released on 1999. Following previous failures with animated features, Warner Bros. never really put the effort into marketing. Despite the lack of financial success, the critics generally praised this one. It was referred to as “far superior to other animated films” and “a sleeper” by members of the press. In recent years this film has gained a cult following and a level of respect from the film community. Steven Spielberg even included the title character in his film Ready Player One.

If you’re a fan of animation this is a movie you need to see. I would also suggest this one to fans of heartfelt films. There is an E.T.-like quality to the story that really pays off. Fans of the stars who voice the characters should also check this one out. I give this one 4.8 out of 5 stars.