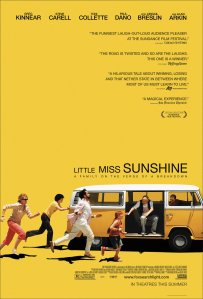 Olive (Breslin) is excited to be a part of the finals of a beauty pageant.  To make it happen, her family of misfits piles into their VW bus for a trip to California.

In 2006 dramas were king. Films like Babel, The Departed, and The Queen were among the major award contenders. Little Miss Sunshine immediately stood out for being something very different. Michael Arndt did a great job mixing drama with comedy, and then taking it on the road. The story is like many road films, bringing together a mix of characters that seem to have very little in common. Both the comedy and the drama come from the troubled lives of these people. The writing does a nice job of pulling back at the right times. Just when things might get uncomfortable, this one takes a turn and lightens up. The balance is really what makes this one work so well. There is something honest at the core of the movie that really pays off in the end. Michael Arndt won an Oscar for Best Original Screenplay for his work on this one.

A great script needs a committed cast, and this cast goes all in on this one. The real key to the movie is the performance by Abigail Breslin. In an excellently cast film she seems perfect for her role. She delivers an energized performance throughout the movie, and really connects with the rest of the cast. She would earn a nomination for Best Supporting Actress for her work on this one. Alan Arkin also does a great job in this one. He provides a unique energy that the movie really benefits from. His connection with the material really shines in this one. He would go on to win Best Supporting Actor at the Oscars.

The rest of the cast also do great work in this one. Carell , Collette, Dano, and Kinnear all deliver on the great script. Their work equally brings out the comedy and the drama. The actors also manage to create great chemistry with one another. Despite all of the wildly different roles they play, these actors still bring out a sense of family in work. Some of the lesser roles in the movie are a little underwhelming, but it’s nothing that takes away from the overall experience.

This one does a nice job with all aspects of the production. The costuming and set decoration help to create a slightly off-center world for the story to exist in. The cinematography and editing also do good work in putting this one together. The music and sound do their part in making this one complete.

If you haven’t seen this one, it’s worth checking out. It is an R-rated film, so be prepared for adult language throughout. If you’re still interested, be prepared for great acting and a story that pays off on all the setups. Fans of the stars should make sure to see this one. I would also suggest this to fans of dark comedy. I give this one 4.6 out of 5 stars.