Based on the book The Treasure of the Sierra Madre by B. Traven

Dobbs (Bogart) and Curtin (Holt) are running out of options in their search for success. After connecting with an old prospector (Huston) they head out in search of gold in Sierra Madre Mountains of Mexico.

This is a classic adventure film, written and directed by John Huston (The African Queen). He adapted his film from the book by the mysterious author known only as B. Traven. While little is known about who Traven was, the author’s work has been made into thirteen different films. The Treasure of the Sierra Madre was originally published in 1927 but John Huston didn’t read the novel until 1935. At that time he convinced Warner Bros. to let him make the picture. Pre-production initially started in 1941, but the Japanese attack on Pearl Harbor brought things to a halt. The film would go back into production after Huston completed several documentaries for the War Department. Interestingly, the heads at Warner Bros. thought that John Huston was making a B-Western. Instead, they got a movie that was nominated for four Academy Awards, including Best Picture. The cast of this one features Humphrey Bogart (In a Lonely Place), Walter Huston (Yankee Doodle Dandy), Tim Holt (My Darling Clementine), and Bruce Bennett (Mildred Pierce).

The writing for this film was excellently handled, crafting the final product from a book with more violence and profanity than the production code would allow. This one begins with a series of events that establish how the world works for the main characters. The themes of greed and failure play strong throughout the movie. The characters are excellently written, providing the actors with a great base for their performances. The dialogue throughout the movie is strong, and often more poignant than you might expect from a story like this. This one also has a number of excellently executed twists that take the story in unexpected directions. The payoffs are wonderful, but also very grim at times. This is not a feel-good story, but a look at a gritty and often darker world. While some of the cultural references might seem dated, this is one that holds up wonderfully. John Huston would win an Oscar for Best Adapted Screenplay for this one.

The cast of this film does an excellent job bringing their complicated and sometimes unlikable characters to life. Prior to the film’s release, Bogart was quoted as saying “Wait till you see me in my next picture. I play the worst shit you ever saw”. To his credit, Bogart created a nasty and complicated character that stays watchable throughout the entire film. His intensity pays off as his character enters an inevitable downward spiral. He also does a great job keeping a realistic level of tension between him and everyone he works with. Tim Holt also does a solid job in this film. His character is very different from Bogart’s, and the two have a number of intense scenes between them.

Walter Huston also brings something special to this one. With his son directing, he wasn’t even sure he wanted to do the film. Despite his reluctance, he delivered a performance that is an essential part of what makes this one work. He develops his role as the voice of reason in an often unreasonable world. Like Bogart and Holt, he also has his share of tough scenes with the other stars. The trio of Bogart, Huston and Holt really makes this one work. Walter Huston’s acting won him an Oscar for Best Supporting Actor. There are also a number of strong performances from the rest of the cast. One of the better roles came from Bruce Bennett. Despite having a small part, he did a good job making something special out of it. This is true of many of the other actors throughout the film. 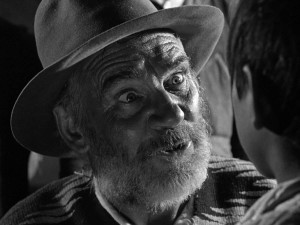 Much of this movie was filmed on location in Tampico Mexico, with some shots being finished in Hollywood after the studio became concerned over the rising budget. Thankfully, there are very few scenes that feel like they came to be on a sound stage. The cinematography throughout this movie is excellent. There are so many shots that help to accentuate the tension in the story. The film also has great costuming and set design that help bring the world of the story to life. All of this came together under the direction of John Huston. He won his second Oscar (for this film) for Best Director.

This is a true classic. If you’ve missed out on it, it’s time to check it out. I would also recommend giving this one another watch. It holds up wonderfully and has true repeat value. This is an adventure and a drama, and it pays off on both genres. I would argue that this is not a film about greed as much as it’s a film about the character of individuals. It’s a really interesting examination of people and their motives. I give this one 5 out of 5 stars.